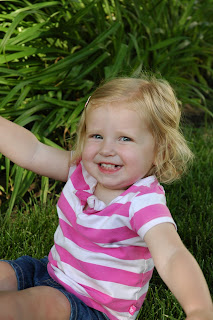 This little girl cracks me up all the time. Everyone in church who sits behind us always feels the need to tells us how much of a ham our daughter is. They say “Wow she’s got personality”. At first I thought this was great. But it’s now the tone in their voices that makes me think differently. You know that tone, its that underlying feeling that they’re saying one thing, but they really trying to say something else. So when they come up to us and say she has so much personality, I believe it can now be interpreted as, “Wow she is really busy I don’t know how you managed to keep her in Sacrament the whole meeting, I know we didn’t learn anything because she was being so distractive.” I Understand she’s busy…not ever very loud, but busy enough that she’s more interesting than the high councilman at the pulpit . So the only alternative would be to sit in the back of the chapel. Most of you know my husband well enough to know, that just isn’t an option. So for all those that sit behind us, I apologize, but at least your kids aren’t in front of us, being distractive!!