Well, it’s official, I’m a pansy. We went one week without two cars and it seemed like it was the most stressful week possible. I seriously thought it would never end. As soon as we sold that car the “Oh crap!” factor set in. Suddenly, I needed to be a hundred places at once including girls camp which would then involve the car being gone for an equal amount of time. Luckily, Steve was a good sport and our friends were even better about it. Steve would get a ride home with a friend who would then go pick up Hallie from being at the babysitters since I was out of town and then bring them both home. Steve’s brother Bob came and picked them up one night to go to a party. But when you only have one car you feel like you’re this huge burden to people, which you are. Just ask Bob, or Ryan, or Grant, I’m sure they loved having Hallie’s sticky fingers all over their cars! 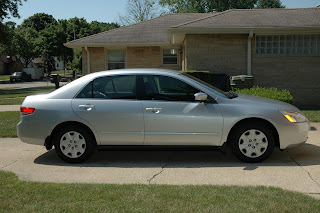 I’m happy to report we again fit into the two car household and boy does it feel good. I did some mad research for that week because heaven knows another week would have been the end of me. Okay maybe that’s a little dramatic, however, as soon as you don’t have a car, you think of all these places you need to be or errands you need to be running. And those that know me well know that I like to be on the go and the stroller doesn’t make it very far! Anyway, I went out and saw a couple cars and Friday morning I called Steve at work and told him I found a good car, he told me I could pull the trigger. So without Steve ever seeing the car or driving the car, it was purchased. What a wonderful husband I have to allow me to be the one to pull the trigger on a car, most couples we’ve talked to, that would be unheard of. We got a great deal and we were feeling pretty good about ourselves, until we brought the car home and the neighbor saw us. Seeing two silver Honda Accords sitting in the driveway struck him a little funny and he proceeded to tell us out silly it looked…it never crossed my mind. It was then that Steve looked at me and said, I guess it would’ve been a good idea to look at some other colors! What can you do?