So owning a home might not have been the best idea for us…I can’t seem to stop the projects. Granted part of that is due to the age of our home which consequently results in more projects than Steve probably thought was possible. Knowing there’s only a while longer of good weather, we decided to work on our front yard that could use some needed attention. We have to ripped out all the bark, plastic, and root system in order to have a nice foundation we could grow some plants from. After ripping it out we realized we needed more dirt. So we rented a truck, made a trip to the landfill and went to another place and picked up dirt. Luckily the back hoe did most the work, because I don’t think we would’ve had the energy to unload it had that been the case. You weigh the truck going in and out, and then pay for how much dirt you picked up. We definitely got our money’s worth. For $30 we picked up 3,000 lbs of dirt. Looking at the receipt we received we noticed the dirt was only $26, but there was a $4 fuel charge for loading it in the truck. Steve said he would’ve gladly paid someone $50 to load it in the truck, so we were pretty stoked about our great deal, until Steve had to start unloading it, which he wished he could pay the $4 to unload it! Anyway, we’ve got a lot more work on the project before we can start spreading the dirt around, but all in due time! 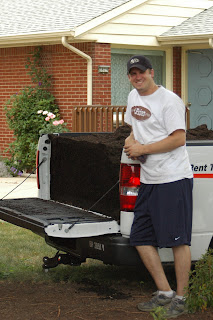