Last night was the Josh Groban concert. I ended up getting a ticket last minute through a friend, Cassidy, and we went together. I felt bad leaving Steve behind because I knew he would enjoy it, and although I felt guilty accepting the tickets, I quickly forgave myself, and the feeling never came back. Granted, Steve said if U2 ever comes to town and he’s given one ticket there’s no question he’s taking it and running, which made me stop and think for just a second, but what are the chances of that ever happening, so I went to the concert with Cassidy!

We had some great seats and surprisingly we were surrounded by people that were quite a bit older than us. I would say the average age sitting around us was probably 45, I guess he’s not your typical teen idol. The ladies around us loved when Cassidy gave a high pitch scream, in fact one lady turned around many times and and gave her the motherly eye, and then seeing as though it wasn’t stopping Cassidy she then opted to plug her ears, quite comical if you ask me.

The concert was amazing, the stage was elaborate, the sound was…well it’s Josh, the sound was perfect, sounding just like the CD. All in All I was quite impressed with the set-up, not to mention Josh’s very soft hands…I think he moisturizes. Now for the story…

During a violin solo, Cassidy and I found it more interesting to talk amongst ourselves, (which the older lady in front of us clearly didn’t approve of judging from the glaring eyes she shot back at us.) Meanwhile, without us noticing, Josh chooses one of the 24 sections to walk down, it just so happen he was drawn to section 205. As we’re chatting we notice an immediate uproar behind us. Sure enough, there Mr. Groban is singing as he mingles with the crowd. Now I think I explained earlier we’re sitting among an older audience who apparently shows no respect to the man of many talents, none of them even stood. So as he continues to take his time walking down our isle Cassidy and I did the only noble thing we could think of at the time, we extended our arm to shake his hand. There wasn’t even a whole lot of competition to do so. I was expecting some type of a brawl between two teenagers who have pictures of Josh plastered all over their room at home, but there wasn’t. As disappointing as that was, I was comforted by the sweet touch of the man himself. I like to compare it to shaking the hand of a dignitary or president, (not that I’m in anyway comparing the two, except for the nature of the hand shake!) He very kindly grasps my hand holds for a second or two as he’s sings looking at me “I am not a hero, I am not an angel, I am just a man”…very fitting, considering the circumstances! And although he is “just a man”, I’m proud to say that I touched, held (however you want to refer to it as!) his hand. And will gladly go back and pay full price to see him again. I’ve got to give him props, he knows how to work an audience and I’m sure it works very well with the marketing plan!

Steve was so cute, he stayed up until 11:45 (which those of you who know Steve and his early to bed habits, know this was quite the sacrifice) when I got home and then let me talk his ear off about how fun it was. It was quite the successful concert. Here are a few pics that Cassidy took of us and then Mr. Groban making the rounds in our section, you’ll notice there’s not a whole lot of standing up going on! 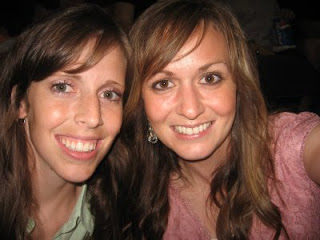 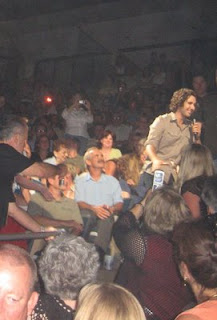