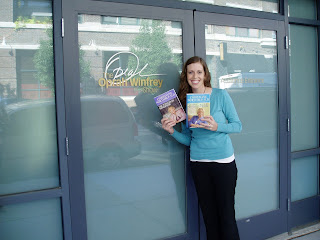 I meant to post this sooner, but time just didn’t allow it! I’ll try and give the brief version, but it will probably end up longer than anyone will find interesting. Here it goes…So, my friend Cassidy who I went with to Josh Groban called late Wednesday night with a ticket to the Oprah show! I was ecstatic, I’ve tried several times to get tickets but have always been unsuccessful. So I jumped at the opportunity, the catch…we had to leave by 9 a.m. the following day, which isn’t that early, but I had to find a babysitter for the whole day. Luckily we have some great friends, who have a daughter that Hallie adores, so at 11 p.m. I called her to see if she was available. I’m sure she had a hundred things she needed to do, but she said she would take her, which goes to show what a great friend she is. Anyway, Cassidy and I drive down to Chicago and we arrive shortly before 11 a.m. We go through security and we pick up the lunch they provide for us. They corral us into this large room so we can be seated, eat our lunch, and fill out the questionnaire for the day”s show. Just my luck…the topic was women’s health. Don’t get me wrong, I find women’s health a very important issue but I would much rather see Tom Hanks, or Steve Carell, but Dr. Christiane Northrup was okay. The whole production was very well orchestrated. From the time we walked in the door they were checking people out, what we were wearing, the colors. So as we ate lunch, they started calling people down in their parties to seat them. They put a lot of thought into this. We were called down early due to our colorful clothing palette. We were seated dead center fourth row. Great seats, the only disadvantage was the air conditioner positioned directly above us, which nearly froze us out. After everyone was seated, they announced we’d be the audience for two tapings. The first show focusing on Menopause, which I tuned out of for the most part, was okay. I made friends with the still camera guy who was seated on the floor next to me. I found our conversation quite enlightening, and fascinating. Every break we had from taping I was asking him questions. (I told my sister-in-law about this and she made the claim that I didn’t deserve to go to Oprah because I went and found the Camera guy more interesting. Which wasn’t the case at all, it’s just that Menopause isn’t on the top list of things I’m interested in at this stage in my life!)

The second show was a question and answer with the same doctor and Oprah. It was entertaining and informational, and at times completely ridiculous and I disagreed, but none the less a good time. It was the whole process that I found absolutely amazing. There is a lot of work and planning that goes into these shows. And it is truly an art to get it just right. Making sure that people with similar colors aren’t sitting next to each other, dull colors sit in the balcony, doing all the sound checks with Q&A’s with the audience before the show. And then Oprah just strolls in minutes before go time. Sits in her pretty little chair with people all around her putting her shoes on, touching up her hair, her makeup, the whole works. It was phenomenal, I would love to go back and do it again. And although we didn’t get a $200 gift card (the taping of the morning show the same day did!) we did get two books by the doctor who was visiting. One of which was on Menopause and won’t be of any use for many years to come!! So I’ll keep you posted as to when these will air.