Last night we were out on a walk just before Hallie’s bed time. As we neared the house Steve very dramatically repeats over and over again, “Oh no, Oh no, you’ve got to be kidding. Sure enough, he points to the top of a tree that was green just a week ago, but it’s already red with fury and dropping leaves. We both agreed, it’s official, summer is over, at least in Wisconsin! At least we can say we took advangtage of it! We had a great long weekend with Steve’s sister Annie and her husband Dan visiting from Oregon. We started out the long weekend with our usual Thursday night routine, television and take-out at Steve’s brother’s house. Every week we look forward to this day so it was nice to have his sister enjoy it as well. Friday Bob got us tickets for the “Behind the Scenes Miller Brewery tour”. Which was actually quite fascinating. This tour takes you in the plants where thy actually bottle/can it up and package it to ship out. It was just the seven of us which made it even more enjoyable. If you ever talk to someone about taking a tour here they rave about the free beer at the end. At the beginning you have to show I.D. if you’ll be drinking at the end, our tour guide was shocked when she realized we were on the tour for the fun of it and not the free beer. She was so shocked she mentioned it several times throughout the tour, and so at the end surrounded by people tasting their beer, they gave us a nice cold lemonade. Quite fun. 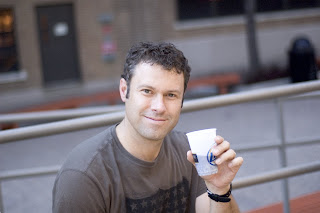 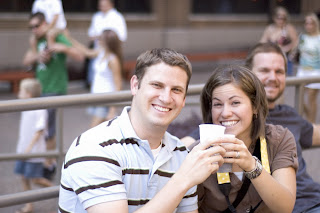 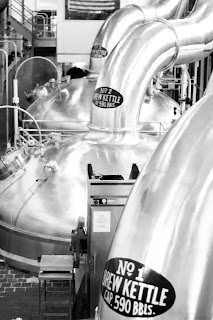 Saturday was Dan’s birthday so we hit up some Thai food and the movie Hairspray, which was very good. After church on Sunday we went to Bob’s for a large brunch…games…conversation…bbq…conversation. Good times. Yesterday afternoon Annie and Dan left, just in time for Steve and I to crash. We were just worn out, too many late nights, and early mornings.

So we’re back at it today, life goes on and fall relentlessly comes. Which is fine because I really do love fall, it’s what comes after fall that depresses me. I like that buffer zone of one season, it makes a world of difference.