Annual trip to the pumpkin farm. Its one of those trips that always sound like a good idea in theory…however the reality is we have a two-year-old, in a muddy, viney (if that’s a word) pumpkin patch. It’s a mess…Hallie keeps tripping over the vines which means her jeans and shoes are muddy, which means she’s going to make a mess in the car, which doesn’t go over well with Steve. The selection is not great at all (last year was much better, but from what I’ve been hearing, there’s a shortage of pumpkins in Wisconsin this year due to the weather.) It’s one of those activities you remember going better than they really did. Last year was great because Hallie couldn’t walk. However this year she wanted to run around everywhere which led to a lot of falls, and then she’d cry because her hand was dirty and would want to wipe it off before going forward; only to fall again just a few feet away. It didn’t help that it was getting close to nap time and she had a mind of her own. We were supposed to pick some apples as well, but that didn’t happen. Instead we skipped the pumpkins and the apples and just bought a caramel apple from the stand. After both Steve and I were quite frustrated with the situation, we head home empty handed. As I’m reflecting our experience just moments later in the car, I made the comment in all seriousness, “I love the pumpkin farm, I love this time of year.” Steve shot me the look of death knowing just moments ago I was yelling at our daughter because she wouldn’t cooperate! Here are some pics. 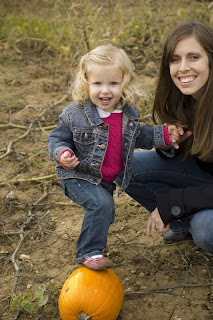 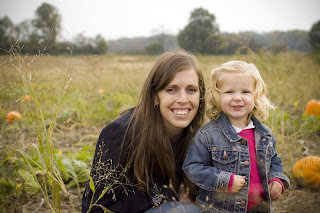 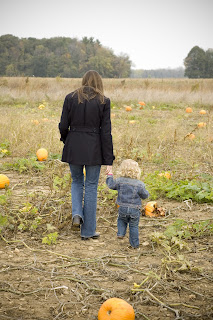