It took a lot of coaxing (for Steve that is, Hallie could care less) but the Incredibles are back!! We had a ward party last Friday and I convinced Steve we should bring the Incredibles back for one last year. For those that don’t know, we were the Incredibles last year for a small Halloween party, so there were only about 4 couples who saw us…so we gave it another shot at the ward party. We’ve been here in Wisconsin a little bit longer, we have our callings, we could be a little more comfortable and confident with our underwear on the outside. So it only made sense that Hallie should dress up as an Incredible as well, even though I already had a costume for her. Steve didn’t see the logic in this, but it worked out in my mind, which sometimes is the only place it works out! Anyway, we had a great time as the Incredible family, and had a blast. As the night came to a close we were putting the costumes away and Steve said, “For the record, I will never wear this again, I’m retiring the Mr. Incredible suit!” Sad! So I’ve already started thinking what we can come up with for next year! 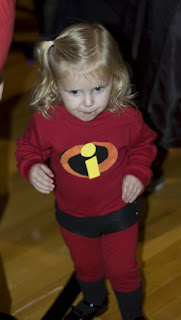 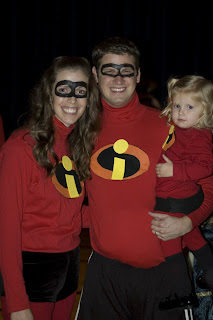