We went to the Wisconsin Dells (a.k.a. Waterpark Capitol of the World) with two families this week, Wednesday and Thursday. We stayed in a two bedroom suite at the Kalahari with the Lundgrens with Chaplins next door and it was awesome. There is something about 40 degree weather that just makes me want to jump in a swimsuit! It was really a great trip. We had the waterpark to ourselves which meant we had more than enough time to enjoy all the rides. Steve spent a lot of his time mastering the Tidal Wave body boarding, which normally would have a really long line, but we lucked out. After seeing Steve’s mad skills, I decided to give it a whirl…and whirl probably best describes how I looked the first couple times. But I became one with the board and managed to keep my swimsuit on so I felt it was a success. (The lady right before me lost her top…somewhat awkward for her I’m sure. The waves beat so hard against you when you fall, it wasn’t her fault, except she was wearing a bikini and it was probably a little small, but that’s beside the point!) Steve pointed out later the large disclaimer basically saying make sure your swimsuit fits very tight or it is possible that it will come off.

Hallie enjoyed some of the slides, as long as she didn’t get her face wet. She disliked the kiddie area because they had misters and waterfalls and she kept telling me over and over again that she didn’t like it because it was raining! After just four hours the kids (as well as the adults) were exhausted. In fact we put Hallie to bed at 7pm last night, and although she woke up at 6am for a short time she fell back asleep and I had to wake her at 10 so we could check out. She was wasted…in fact the whole day she was a little miserable. She didn’t want to get in the water or play at all, which kind of put a damper on the waterpark experience today, so it was a good thing we enjoyed ourselves yesterday, and had a blast. So for two short days we showed off our white pasty bodies, and enjoyed every minute of it!! 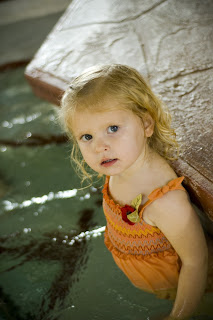 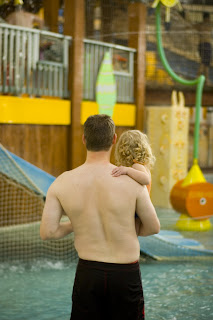 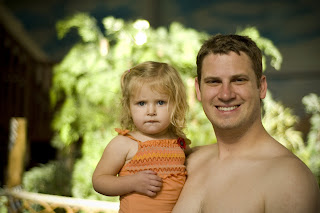 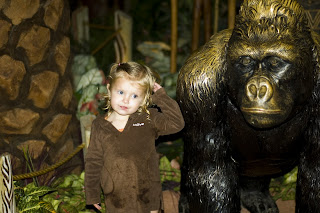 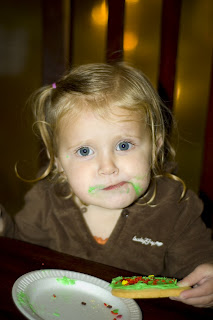