We made it. We are officially ready to celebrate the holidays in Denver. I awoke early this morning and I was a little bit antsy. I knew with all the traveling it wouldn’t be a stress-free day, so as I waited (with Steve) at the bus stop, which was 20 minutes late I could feel the anxiety rising within my body. However, I’m happy to report the anxiety build-up was really for nothing, we had a seemlessly worry-free day for the most part. Here’s how the day panned out for us. It started bright and early. We were flying out of Chicago so Steve dropped us off at the bus station. Of course it was late which made me nervous for the day, but luckily I scheduled in enough buffer time to not worry too much. Hallie’s first bus ride was a success. A few DVD’s kept her occupied long enough. 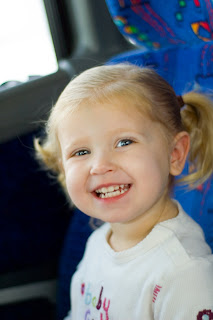 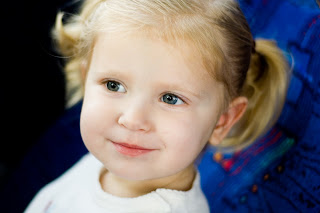 We then walked the three blocks over to the train station which would take us to the airport. As I walked up to the station I saw the three flights of stairs, I then looked at the backpack, duffle bag stroller and Hallie and wondered how in the world I would make it to the top. As I was strategizing at the base of the stairs, two younger guys saw my dilemma and offered to carry my stuff to the top. Thank heavens, I was being watched after today. When I got to the top I bought my ticket and there was a girl who didn’t have any cash to buy her ticket to the airoport, only a credit card. So, seeing as though someone just leant me a hand I figured it was the least I could do to buy her ticker. (I felt as though I was part of those Liberty Mutual Insurance commercials where one person sees a good deed which compels them to perform a good deed which is passed on person after person.) Our train comes and because I have the stroller and bag it takes me a few seconds to get out of the gate. Those few seconds make me miss the train. Even the train station worker just watched me struggle and trying to make it to the door lets the train continue on without us. This bummed me out. First of all it was freezing, Hallie was getting restless and hungry and I just wanted to get to the airport to ensure we didn’t miss our flight. We made the next train which put us at the airport in plenty of time to make it through security (not without being selected for the extra special pat down) and a quick bite to eat. The plane ride was comfortable. This is the first time we’ve had to pay for Hallie and yet she still sat on my lap…I was debating whether to ask for a refund…I doubted anyone would listen to me plead my case. Regardless, we made it. I’m so excited to be here with my brother and his family and looking forward to a week of nonstop fun!