I’m not really sure what I do all day (okay that’s not entirely true) but I sure remain busy. Steve comes home from work and asks what I did…I think to myself…I know I cleaned and made the bed, but it never equals the 10 hours he was gone. So the story of my life. Half the time I say I played with Hallie- we go over her colors, we play baby (all the time) and of course she loves cooking me meals in her “kitchen”. Which takes a lot of time, yet I still get the blank stare from Steve wondering, “Yes, but what else”. Don’t misunderstand me, he’s not at all trying to keep tabs on my day. I think he wonders what it would be like to stay home all day every day, think of the football games you could watch! Little does he know…

Anyway this last weekend was a good one. We are friends with a local high school basketball coach, so we always make an effort to go to at least one game each season, and we picked a good one. Rival high schools, the opposing team had 5 players over 6’2″ one of which was 6’7″. I don’t know where you’re from, but I’m from Idaho, and we didn’t grow boys that tall. It was a great game to watch and it was fun to see how much Hallie and Steve got into it, even though we didn’t know anyone on the team. We enjoyed it so much, we want to go to a couple more. We went to some friends’ house afterwards for victory steaks (they were absolutely delicious.)

Saturday, Steve got tickets to the Admirals game (hockey). I had not been to a hockey game before so this was fun. We left Hallie with a friend, and enjoyed a night out together. The best part about it, wasn’t the hockey at all. They had a pre-game concert by the Goo Goo Dolls. I may be old school in saying this, but they were awesome, they have a ton of songs I can sing every word too. Plus one of the band members was pretty entertaining. He had dreds, wore what appeared to be women’s skinny jeans and he walked around stage with his socks, with his pants just long enough to kind of curl around the heel of his feet. He was dancing all over the place. 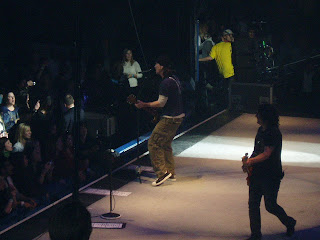 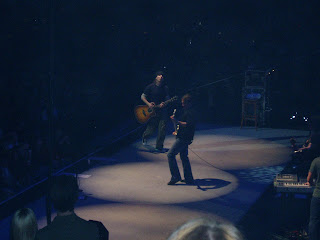 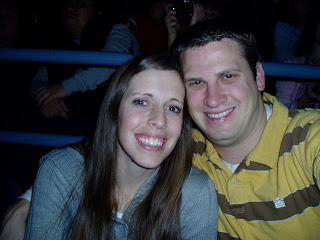 Steve and I saw them this summer but we were pretty far away, so it was great to see them again. We had fantastic seats, 14 rows back. The hockey game started an hour later. It’s official, I know nothing of hockey. In the first couple minutes this fight breaks out and I watch in awe as the refs just stand there holding the other players back. CRAZY! It was fun and I hope we can get back to watch another game. We did leave early. We couldn’t stand to wait for the zambino…or whatever you call that ginormous machine, to go over the ice one more time!

Sunday we started our new church schedule, 1 pm. Although we will be more than on time to church, (which isn’t any different than when we went earlier) but now I’m fighting a child whose nap time is 12:30. I’m convinced each and every nursery leader is going to be exalted for their good works in their calling. We get home by 4:30 at the earliest which doesn’t give enough time for a nap before bed time. Which leaves us with an absolutely exhausted two year old who is past the stage of tired and has reach the point of tornado in a dress, destructing everything and everybody in her path. By 6 p.m. I just had to say, “Okay, I quit. You win. Eat all the ice cream, and fruit snacks your little heart desires, then go into that room and rip absolutely everything off your bookcase and take every item of clothing and shoe that you have and throw it against the wall. You win.” That’s when both Steve and I started feeling better about ourselves. Sundays used to be such a peaceful day….