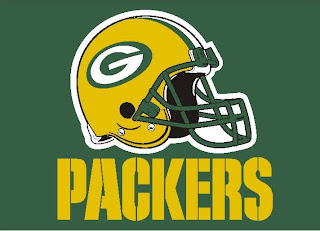 When we moved to Wisconsin we didn’t fully understand Packer-mania. In fact I can’t say I knew more than one player (the only one I did know, Favre was only because he was always in the news…is he going to retire, is he not…back and forth, back and forth!) After a year and a half of living here I’m not sure I understand the hysteria around the Packers anymore but it sure is fun to watch and it blows my mind how crazy these people are. For starters. Yesterday it was 1 degree. Just one. With windchill it was a breathtaking -17 at one o’clock in the afternoon. In fact, there was windchill advisory for the whole state, if it wasn’t necessary to go outside, stay at home. But gauranteed the game today, regardless of absolutely frigid temperatures, that game is going to be a packed house. It’s almost as if the city just shuts down during game time. If you ever want to go shopping and not deal with the crowds, game time is the time to go. I worked last Saturday and my shift ended at 3 p.m., gametime at 3:30 and sure enough, 2/2:30 rolls around and the store starts clearing out, the mall was a ghost town when I was leaving. Everywhere you looked yesterday was a sea of green and gold. I asked one older man, who was so proudly displaying a GB Turtleneck, matching sweatshirt, coat, and hat, “If you’re wearing all this Packer gear today, what are you going to wear tomorrow?” He looked at me and laughed. He said, “Honey, I wear this stuff every day of the week.” And he was completely serious. Packer gear is a brand of clothing here. It’s like Gap, or Ralph Lauren.

The local news has been a riot here lately. I think their instruction was to take every story and somewhat tie it back to the Packers. “Mother gives birth to baby in route to the hospital, we’re told she thought she was going to give birth last week while watching the Packer game…speaking of the Packers…” (announcer trails into some story about Brett Favre) or what about “Senator Obama leading in local polls, Packer win could have positive effect for Obama in polls.” Okay those two were made up, but no joke that’s how it is every night. Take one completely independent situation and somehow it comes back to Packers. What I can’t stand is when the news announces that Lambeau field is accepting volunteers to clear ice/snow from the stadium seats. No joke. Hundreds and hundreds of people show up for this. And lately it has been an every week ordeal. No where, and I mean no where else would a Stadium take volunteers to do the work that a normal stadium would pay grounds crew to do. But not here. They know there’s enough Packer idiots to do the work for free, why pay someone. 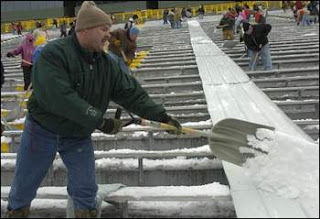 Can you imagine, your sitting at a PHX Suns game (I only use them because Steve is in love with them) Its the fourth quarter and over the intercom you hear, “For anyone willing to help clean popcorn off the floor of the arena after the game, please meet in section 214.” It just wouldn’t happen. I don’t like shoveling my own driveway, let alone shovel the seat for someone else’s rear end.

So today is the big day. All the madness could be over today. However, the Packers are at an advantage because there’s not many teams used to playing in below zero temperatures. That is a true blue (or green I guess) fan who will stand outside and cheer on a team in those conditions. If I was given tickets free of charge, you couldn’ t pay enough to go to the game today. Nope, not me. Instead I might, or might not, sit and watch from the comfort of my own home. I might throw on a scarf just to be festive.