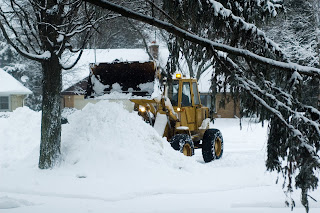 A couple days ago (Groundhog’s day), it was announced that the gopher did indeed see his shadow which means 6 more weeks of winter. After yesterdays storm, six more weeks of this seems somewhat unbearable! No longer do we have simple truck plows scouring the streets, no they aren’t enough. They now have called in the big dogs, construction grade equipment to try and get the snow off the streets. They just can’t keep up with the snow that is falling. It was a pretty rough day yesterday in weather department. I was just reading an on-line news article and I saw this headline…”Snowfall straining salt budgets”. They used the allotted amount of money for salt for the year…it’s February 7th…I just hope we don’t get snow this November and December, it could be ugly! As of Tuesday, February 5, Milwaukee had received 52.2 inches of snow in 2008, essentially in 5 weeks. Add Wednesday’s storm of 17 inches bringing our grand total to 69.2 inches, just shy of 6 feet, in 5 weeks. I’m so glad I could be part of this record breaking winter, I guess it makes for good stories to pass down to my kids right?
Yesterday’s storm was mammoth, Steve trudged into work…on time (although everything was shut down including all city employees, and countless others, including the mall, since when has a mall ever shut down for weather??) so he wouldn’t be the only one who didn’t show up…it was opposite, he was one of the three in his office that came in out of 16. Needless to say after two hours, with a continual storm, his office was sent home, making it his first official snow day! He was giddy. We spent some time outside playing in the snow. We were out there for about an hour and we could have gone much longer if it weren’t for the wind. It was brutal. We got Hallie bundled up pretty good and besides the wind burn, I think she enjoyed herself. Steve taught her oh so important things, like how to lick the snow while you’re laying in it. My favorite part was picking up Hallie and throwing her, as if on a bed of blankets into the snow. She got a kick out of it. 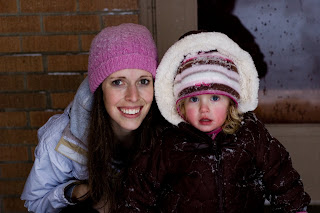 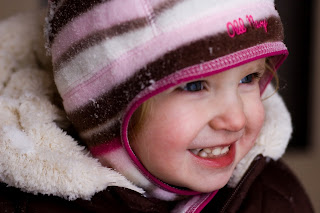 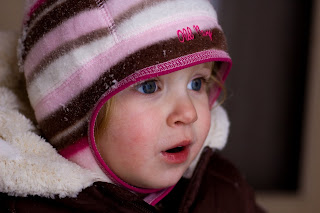 We had some friends over last night for an “I hate Wisconsin party” which turned out pretty well. We closed all the blinds and acted like we were baking on the beaches of Hawaii. And it was great, until it was time for them to walk back to their house (5 houses down) with the storm going on its 17th hour, snow easily coming up to the youngest ones waist in some places. We are definitely dreaming of warmer days to come! 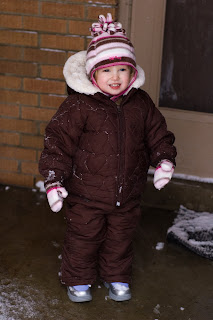