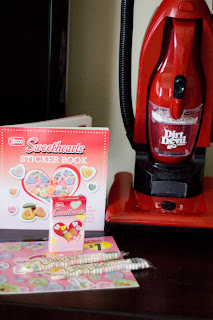 It was just Hallie and I for Valentine’s day.  She’s at an age where she doesn’t really get that it’s a holiday or that we’re making traditions that she will hopefully cherish later on in life.  For her it’s just another cupcake, bag of candy, and a toy.  So we kept it somewhat simple but she started to get it about half way through the day, of course at my hundreth time saying “Happy Valentine’s Day”. 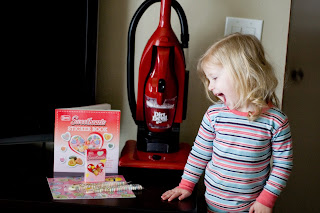 Valentine’s day is a hard word for a two year old and even when I knew what she was saying I still didn’t get it. I introduced her to the famous “candy necklace” and life for her, I’m sure, will never be the same.  She didn’t get that it was candy at first, which I should have used to my advantage. To her it was just another necklace that she could yank on continuously until all the beads go flying, as she continually says, “Oh no mommy, oh no.” She refused to let me put it on her.  So I forced it over her small head and she kept trying to pull it off.  No, I no like it mommy, no.  But I knew if I could just let her see the light, she would be in heaven.  So I quickly said, it’s candy, just like it.  So she sticks her tongue out and it was love immediately.  That’s delicious mom.  I knew she would like it.  So sure enough she can’t stop.  The problem was, she couldn’t figure out how to bite them off so she was just licking them, all of them continuously.  So of course at this point she has “candy dust” all over her cheeks, neck, and shirt.  And I was okay with it, because by golly it’s Valentine’s day. 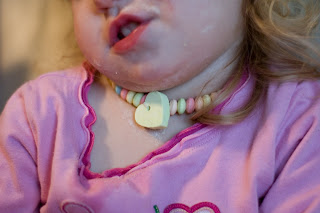