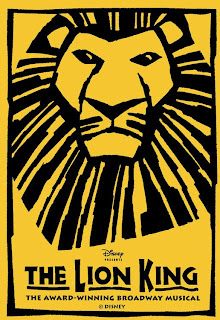 For Valentine’s Day, Steve surprised me with tickets to go see the Lion King Musical that was traveling through Milwaukee. He planned it with our friends the Johnsons, so we could all go together, which made it a great night. We dropped Hallie off with our sister-in-law Virginia who so generously offered to take her since it would be a late night for our normal babysitter, which we would prefer every day of the week. We hit P.F. Changs on the way down, made reservations before hand and believe it or not, we were in and out in 36 minutes!! You’d think that we’d inhaled our food or something, but we didn’t, it was really that quick. We ordered the minute we sat down and our food was out to us in no time. 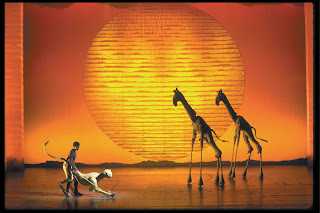 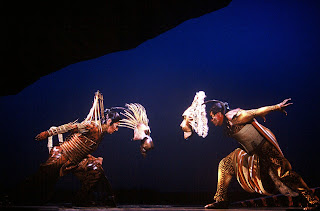 We arrived at the theater in time to walk around a bit and then take our seat. Now of course we all know the story of Lion King, so it wasn’t like going to Wicked where I had no clue the first go around. I’ve loved Lion King since it came out, loved the music, everything so this was quite entertaining for me. The costumes are unreal- so creative and realistic moving. Minutes in to it I had to look for the people behind the costume because I was so caught up in all the movement. For the most part it was word for word from the movie with a few different songs.

My favorite character was by far Timon. At first I was caught a little off guard by the costume. Timon is obviously a tan/brown character, but the person who moves him is wearing bright green, so for a while I couldn’t help but look at the green guy, but than I realized it’s supposed to be the grass- green grass. After I accepted this he became my favorite character. Thinking back he was probably my favorite character in the movie as well. He was so animated and his movement looked exactly as if it was the animated feature. I was impressed with all the movement. There has been a lot of time and energy put into the costumes and the cast, and it paid off because it was tremendous. Steve enjoyed it just as much, and we both agreed events like this are definitely something we will continue to be willing to pay for in the future!

Hallie didn’t miss us at all…Virginia knows how to win a child over…take her to Chuck-E-Cheese and let her go crazy on all the games!