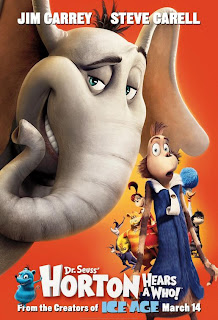 I had to work this morning, (my weekly four hour shift) which gives Hallie and Steve some special “Daddy-Daughter” time. Upon arriving at work I see a large stack of “Horton Hears a Who” special screening movie tickets. Pottery Barn Kids often gets special screening for children’s movies, which we’ve never taken advantage of, I’m not sure why. Anyway, the screening was for this morning. So I hurry and call Steve and tell him it would be a fun thing to take Hallie to. He says he couldn’t get them ready in time, not worth the drive, yadda, yadda. That’s fine, not a big deal. Fifteen minutes later I see Hallie running into the store, of course thinking she’s there to play since we often do that. But they were there strictly on business: grab the movie tickets and run. I was nervous they wouldn’t make it in time, or it would be way too crowded. So I was happy to hear when I got home that they made it in time and with seats to spare. I was a little bummed out because I had made plans to go as a family next week to the movie, seeing as though it comes out on Friday. But who can pass up a free ticket. This was Hallie’s first movie theater experience*, which of course needed to be in a theater with a hundred other noisy kids so no one noticed her. Steve said she did pretty well for the first half, then started finding the chair more fascinating. She was preceptive however, she remembered many of the names of the characters and would recall them to Steve multiple time when they came on the screen. After her nap, I asked her how the movie was. She starts telling me in an excited voice about the elephant…the monkeys…the kangaroo….Jo-Jo…I couldn’t help but smile at the excitement she had for it. It just needed to be half the time and it would’ve been perfect. Steve said it was a cute movie- good to find out that Hallie is a little too young for movies on someone else’s dime!

*Hallie’s first movie experience we really don’t count. It was Pride and Prejudice with our friends the Owens. Hallie was just over a month old, and everyone, and I mean everyone said, “Oh everyone takes newborns, they just sleep through the movie anyway. We took ours all the time.” Everyone we knew told us the the same story. Our friends were moving away so we wanted to go out with them; we went to Pride and Prejudice. All those that know how Hallie was as an infant can probably imagine this was a disaster. I’m not sure what Steve and I were thinking, she didn’t sleep one wink at home, let alone in a theater- being new parents we trusted everyone else’s judgment! We now know better. Steve spent the whole time standing on the side or outside trying to keep her quiet. I figure she was out of the theater for well over half of it, so it really shouldn’t count as her first movie experience!*