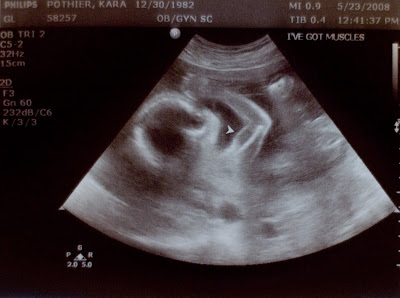 Well, there you have it…we’re having a boy! He flexed for us multiple times to show off his monstrous muscles. Steve likes to think that it comes from him, Hallie’s convinced it’s her muscles that were passed on to the baby, and when we talk about her new baby brother she always brings up the muscles, and flexes herself! She’s a kick in the pants sometimes!

I was a little surprised by the idea of a boy. For some reason or other, I had done a great job of thoroughly convincing myself that we were having a girl. I knew what the nursery would look like, I had a name, I envisioned little tea parties between the two girls, I was really excited. Needless to say, I was a little taken back when we found out that tangerine and pink stripe would not be a good combination for the baby’s room. Steve was giddy, he couldn’t stop smiling. He’s been talking about this boy forever, “Me and my boy…” (tune out the rest of the phrase every time.) He made such a big deal about having this boy, I didn’t want Hallie to fall by the wayside. He has been so good to do his cute daddy daughter dates with her, I don’t want that to change and I’m afraid by having a boy it will. I understand all homes need a little boy to complete the picture- I just thought ours would be coming a little later.

It took a good day to wrap my head around this idea. We’re going to have a little boy. We’re going to now stop shopping in the doll department and start buying trucks and cars. We’re going to have a future priesthood holder. We will have a little scout! It’s all so foreign to me. Steve on the other hand felt the same way about Hallie, girls were just a bit foreign to him and yet I see how he plays with her and loves her. Regardless of unfamiliarity- there is an unconditional love. We found out Friday afternoon, and by the time Saturday afternoon rolled around I was becoming comfortable with the idea. By the time I showed up to work at PBK Saturday night I had hit the excited stage. I did a little shopping for some clothing- which by the way- girls are so much more fun to shop for, but I suppose a boy will be cheaper to clothe! And the girls at work were so fun and so energetic about going through colors and quilts for a boys room. I’m excited at what I came home with for bedding- I’ll post pictures later, (who am I kidding, it will probably be after the baby is born, that’s the time table I’m working on!!)

Today is Sunday- and I’m excited, excited for another dimension to be added to the family. Excited that we know, what a different feeling it is just to know one way or the other. And while I really would like another girl later on, for right now we’re going to tag team this family 2 on 2, and we’ll most definitely enjoy the process.