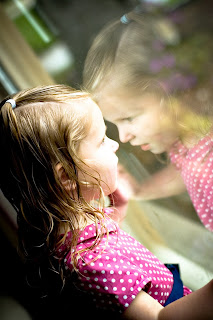 I was talking with my brother-in-law this evening (at our Survivor Finale party) when he said, “You know Virginia and I were talking about you today.” For some reason, any time I hear a story prefaced with that phrase I automatically assume it was negative…but then again, if someone is really speaking negatively of you, would they tell you a story about it, probably not…my first theory stands corrected! Anyway, he proceeded to say that they were having a conversation about motherhood (since that’s the topic of the day), how much Virginia has enjoyed motherhood, and my name was brought up with the question, “Do you think Kara enjoys motherhood?” To that question, Bob said he felt that I truly enjoyed motherhood, although I play a tough front which gives the impression to many who don’t know my personality, that I’m not enjoying what I do. But he said he can see it in the way that I talk to Hallie as well as the things I go out of my way to do for her that I enjoy what I’m doing.

I was first impressed with how well they know me. As I listened to him explain how he saw me, I was relieved to know that he can see how much I enjoy what I do, despite the front I put on at times. I am very sarcastic and many times its easier for me to make light of some situations rather than allowing frustration to boil within me. I’m not the type of person to get emotional over things or gush over my child, and I think within motherhood that comes across as cold and not loving being a mother. But, I don’t have to tell anybody how much I love being a mother, and I don’t feel pressure to because I’m not here to prove anything to anybody. I’m simply a young mother. New to the whole idea of devoting every ounce of sanity and energy to a child(ren). And although frustrating at times, it’s who I am now, and what I do, and I tell Steve every day, “I seriously have the best life ever!”

So to Bob and Virginia- Thank you for recognizing what most probably don’t realize because I don’t let it show through as often as many would hope. Also for sharing the conversation with me. Sometimes you go through life not even thinking for a minute what ever people might think about you. Your observation made me reflect how I probably come across, and how skewed that perception is. I always enjoy a good reflection. To Steve- for being so supportive of my hobbies and interests on top of raising a 2 year old. I feel as though I can conquer anything because I have you by my side. To Hallie- I love you with all my heart, and don’t ever think for a minute that I would rather be doing anything else but raising you. To both my mom and mother-in-law who stand has wonderful examples of seasoned mothers and lived to tell about it! The world is a better place because of mothers like you. Thank you, and Happy Mother’s Day!