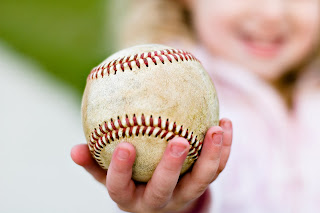 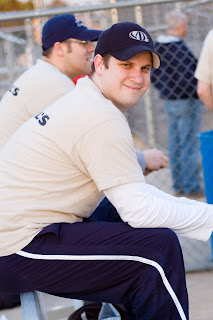 It’s softball season! Steve plays softball on a Kohls team every Thursday night during the summer. I’ve never been a huge fan of softball, I played it for years and it just wasn’t my favorite sport. I played fast pitch but it’s really all the same in my book.

Granted, its a great sport for the mom who is trying to keep tabs on a young child and really can only watch moments at a time. I can see Steve getting ready to bat so I ignore my child who is running full speed down the concrete path on the brink of losing her balance and biffing it. But its okay because as soon as he hits the ball, I have a whole half of an inning that I can nurse my screaming child back to health! 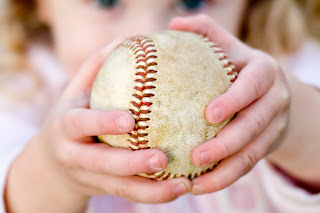 Every week its a gamble as to whether Hallie and I are going to go or not. I’m the first to admit I’m a fair weather fan. But something I’ve learned while living here, is never bet on the weather, you’ll always lose. There were two or three games in a row I honestly intended on going to, but the down pour 1/2 hour before the game was a big drawback. What I love about going is the fact I know Steve really wants us there. Every week he asks if we’re going to go, and any sign of hesitation out of me makes his face grow long. He loves having us there, He loves Hallie talking about the baseball game. He loves talking with me about his good hits, and great saves (which to his credit, playing second base he has some great plays!). I am learning to enjoy the game simply because I can see how much he truly wants us there. It’s so cute!The other great part about going to the games is the social aspect. There’s all the other wives and children who go to support their husbands which makes it fun, as well as Steve’s brother and his family who have been frequent attendees (now that Survivor is over, we need a good excuse to get together!)

Like I said before, it’s one of those sports that you can sit/stand and have great conversations while still enjoying the highlights of the game. I can’t say that I’m 100% for it all the time because it still takes some coaxing to get me there. But I’m excited for the season. I’m most excited that Steve is doing something he enjoys, so often its the other way around because I’m the one with all the hobbies! So grab me some peanuts and cracker jacks… 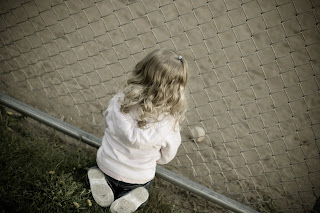 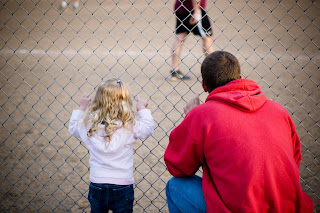 Hallie just hanging out with her cousin Josh watching Daddy work his magic!