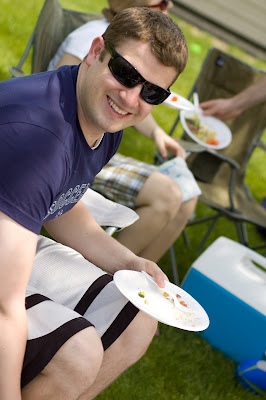 I know this is a little past due…really there’s no excuse, so I’m not even going to make one up! Memorial day weekend was a great weekend for us. It started with Steve’s half day on Friday, us finding out we would be the new parents to a baby boy, and the purchase of a grill! (There’s no correlation to finding out we were having a boy and buying the grill, they just happened sequentially!)

Saturday was yard/basement day. Man were we productive. We have been working on clearing an area for a garden. We tilled the ground and Saturday we were ready to plant our plants. We both grew up with gardens so it only seems natural that we too would want a garden to pick tomatoes from, we’ll let you know after this year if it will be a yearly tradition for us. We might just as soon realize it’s more work than its worth, who knows. So we planted plenty of tomato plants (for salsa, and eating), peppers (again for salsa and everything else you need a good pepper for!), June strawberries, zucchini, cucumbers, green onions, and a cantaloupe plant. Why a cantaloupe plant you ask? Great question, Steve had the same one. Sadly enough it was somewhat of an impulse buy!! Who would’ve thought you could have an impulse buy at a nursery, but I am proof that it happens. I was going for a wide variety in the garden, partially to see what would grow best so we would know for next year. I love a good melon, and cantaloupe reach maturity early fall- so after we’ve been able to enjoy some nice veggies during the summer, hopefully, just hopefully, this plant might produce something worthwhile. And if not, well, I learned a good $2.50 lesson!!

Since we worked so hard on Saturday, Monday was nothing but fun. Steve arranged to play doubles tennis first thing in the morning. He doesn’t inform me of this until Sunday night of course, and I start thinking. I’m not in the best shaped I’ve ever been in…5 months pregnant puts a nice belly on me causing a difficult follow through, and on top of it, neither one of us has played in over a year. But we went, had a great time, even won which was a little bit of surprise, no doubt I was by far the most winded player. It’s nice to know I still have some agility left in me, but it’s decreasing rapidly. We soaked up the sun and of course got burned!

Right after tennis we had a Kohls BBQ with all the BYU employees. Once again a great time. Hallie was in heaven at the playground, Steve was in heaven on the sand volleyball court, and I was in heaven knowing that it was 80 degrees. Once again we soaked up the sun and once again go burned! (For the record, Hallie had layers of sunscreen on and remained invisible to the sun. Steve and I on the other hand forgot to use it on ourselves, and we didn’t realize it until it was far too late!) Our friend Jodee made this fabulous cake- most people bring chips, potato salad, cookies, but not Jodee she goes all out and we all wish we could take credit for it. 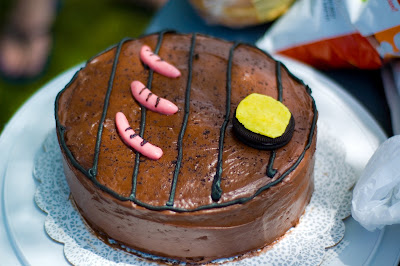 After the BBQ, Hallie went down for a nap before we headed over to Bob and Virginia’s for BBQ #2 which was also a great time. We enjoyed some great food, even better company, and by this time learned our lesson and sat in the shade. I took Hallie home for the night while the gang went out to the movies – Indiana Jones. Steve was concerned I would feel left out…not one bit. I haven’t ever, no never, seen any of the Indiana Jones series, so this didn’t strike me as the time to start!!