I was just looking back at several posts and realized we had a really extreme winter. I’m hoping that we never experience something like that ever again…on a happier note we’re into a new season.

We’ve been having warm weather, which allows us to spend hours outside every day. Things were going really well until this weekend. I was outside Friday afternoon while Hallie was napping and I hear this awkward ambulance siren. I commented to the neighbor I hadn’t heard a siren like that before. With a dumbfounded look, he says, “That’s a tornado siren, have you not heard that before. Get downstairs.” WHAT! Who knew they even had sirens for tornadoes?? Sure enough, there were tornadoes in the area but everything was fine… besides a little rain storm…

Which brings us to Saturday. With all the rain the day before, Steve and I worked on the gutters, he cleaned them out real well, and we fixed some downspout issues. Within 20 minutes of us cleaning up and putting all the tools away it starts to rain. And rain…and then harder, and harder. Once again tornado sirens…and more rain, and then some more. I have never in my whole life seen that much rain in such a short (7 hours I guess isn’t that short, but you get the idea) period of time. At first it was kind of cool to watch, and then it wasn’t so cool. The streets start to fill up. Consequently our yard fills up. After a few hours of rain, half our backyard looked as though it had been irrigated, that includes the area with the garden. I’m not a green thumb but I’m pretty sure you don’t irrigate a garden like ours experienced yesterday. The whole garden was submerged in 7 inches of water…submerged. (this can’t be good for the tomato plants!!) So this morning I wake up to survey the damage, half the garden is still in water…as are portions of our yard. I try to shovel out some of the water but to no avail- the neighbor’s yard is full of water as well, so every shovel of water I took out of our yard, that much trickled from his yard…my efforts were fruitless. And this is after hours and hours of no rain. Maybe we’ll try a garden next year. We’re supposed to get more rain today, I’m not sure where the heck it’s going to go. Our yard has soaked up a reserve for a month! 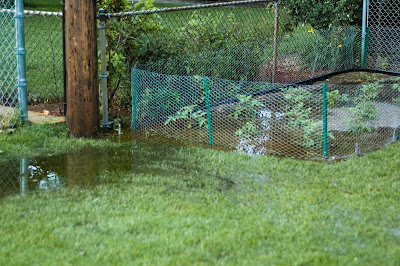 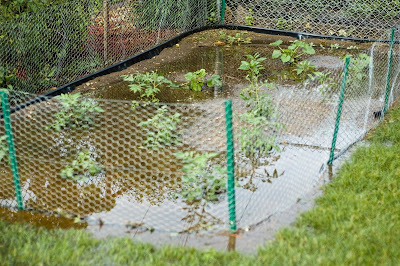 I was reading the newspaper this morning to learn more of the storm and this is what I found:

“The highest I’d ever seen it was 4 billion in May 2004 when we had 19 straight days of rain,” Graffin said. Untreated sewage ran into local rivers and Lake Michigan. Graffin said the agency won’t know the amount of the overflow for several days. MMSD’s deep tunnel system holds about 500 million gallons, he said.

The lesson to learn from this…don’t swim in Lake Michigan!