Prepare yourselves- this is a long one- it was that good of a day! 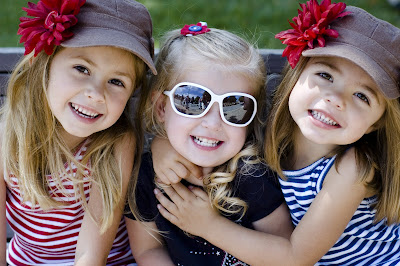 We’ve successfully completed our fourth Wisconsin 4th of July. Three years as residents to the state, and the first year as a visitor to Bob and Virginia. And as we drove home at 11:30 that night Steve and I agreed, it was the perfect day- as far as the holiday goes and we wouldn’t have changed one thing.

To start off, we somewhat overbooked ourselves as far as festivities go. We had originally planned to go to three different BBQ’s, I’m not sure what we were thinking. But as we were already late to the first one at 10 a.m. we opted for another route: Wauwatosa parade. The last time either one of us attended a parade was years ago in Orderville, UT, when we worked in Zion. And I guess we didn’t even watch that parade…we were in the parade!

So, we decided last minute to go the local parade, which was already half over. We met up with our friends the Egberts and really enjoyed the 45 minutes that we saw of the parade, any longer and I think we would’ve been bored. Hallie had a blast with her friends, catching a few pieces of candy here and there and watching in amazement as the “dancing grannies” scattered past. She waved at most everyone that walked by and would grin in pleasure when someone would acknowledge her and wave back. We were there for the perfect amount of time. 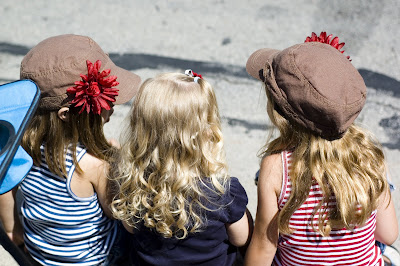 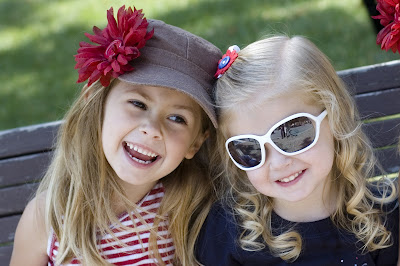 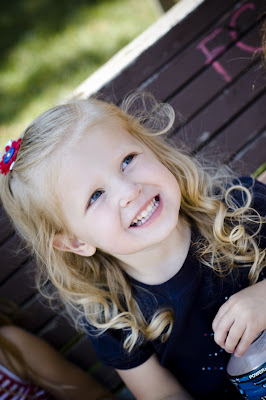 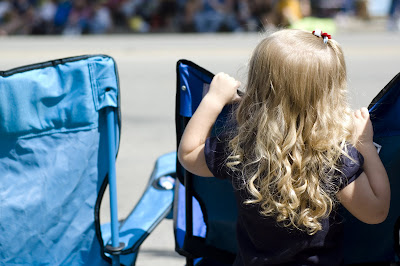 Next we headed over to the ward BBQ where we met up with friends galore. Being the awful parents that we are, we opted not to bring Hallie’s swimsuit…big mistake. She found the kiddie pool quite enjoyable regardless of wearing all her clothes. At first she cautiously took cups full of water from one area to the next, but before long she was drenched and she threw caution out the window. After she was soaked head to toe, we borrowed a swimsuit from a friend…a little late yes, but none the less she still had fun. Steve and I were able to meet some new people (we’ll go out on a limb and call them friends, the jury may still be out whether they enjoyed us the same!) as well as enjoyed old friends. It made us very grateful for the ward that we live in and the people who have come into our lives. 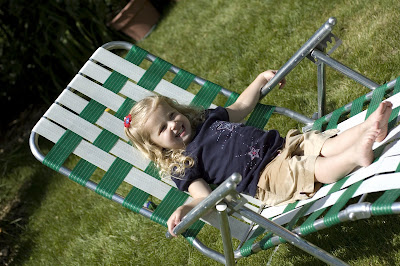 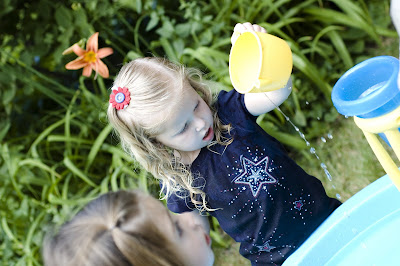 After fully baking in the afternoon sun for a sufficient amount of time, we took a short break at home in order for Hallie to get a nap, and then headed out for our last stop of the night to some friend’s home. We ate some great food, enjoyed the company of friends and family (Bob and Virginia’s family as well as Steve’s sister CarolLynn) and just enjoyed ourselves. There were a few organized competitions, bubble blowing contest being one of my favorites, with the sidewalk chalk name contest being enjoyable as well. 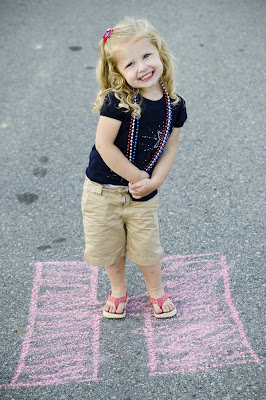 Hallie proudly displaying her H in the sidewalk name write off- I helped a little. Which is why its short and sweet! 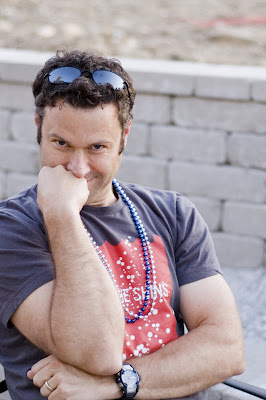 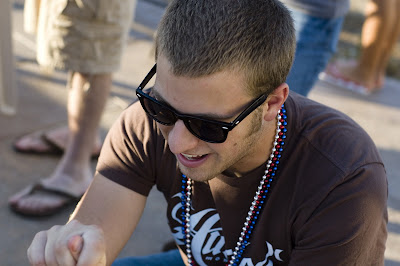 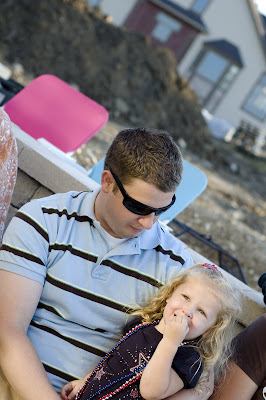 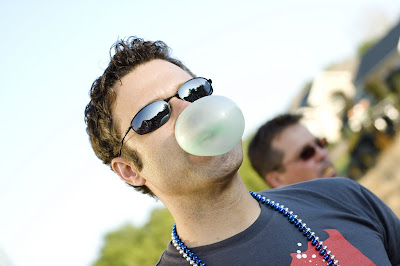 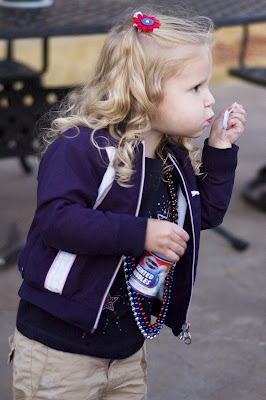 Bubbles- one of the many prizes for the evening.
Later into the evening we sat around the fire pit and made some delicious s’mores. To top off the evening the neighbors had a fireworks showdown. No joke, these two homes (who evidently do this every year) try and outdo one another with their fireworks show. This worked to our advantage as spectators. Now, I’m not talking about spending a couple hundred dollars at the local firework stand…no, this was above and beyond what any stand/store has to offer. I swear, these were commercial grade fireworks. What are commercial grade fireworks you ask…good question…I’m not sure but just trust me on this one. For starters the show went on for 30-45 minutes. Consistent booms and bangs with a constant array of colors, sensory overload! Every few minutes I thought, this must be the grand finale…and then it kept going. This would get the neighbor riled up who would then put on an even better show with brighter colors and bigger booms! Just when we thought they had run out of money…they would light another batch. It was fascinating- and what made it more impressive was the fact that this was a residential neighbor. It was longer than the show the city put on. The only thing I can think that would have made it better than the show we saw in Chicago last year would’ve been if the fireworks had been coordinated with music…maybe I’ll send a little thank you to that neighbor and offer the suggestion. Then again, maybe I’ll ask him to take the thousands of dollars he would spend on his little show and donate it to the “I Love Gap” scholarship fund! I’m curious to drive around that neighborhood during Christmas to see how deep this competition runs- perhaps it’s only fireworks, but what a display it would be if they got into Christmas lights as well!! Can’t wait for next year! 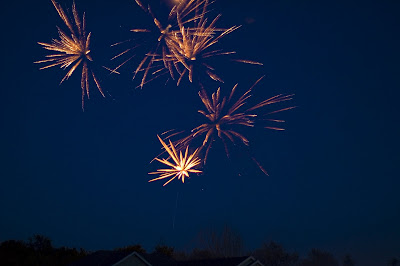 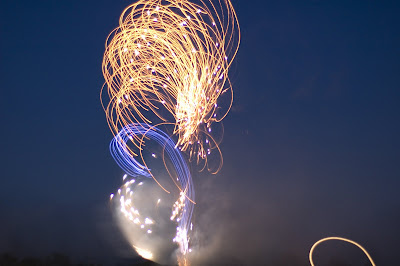 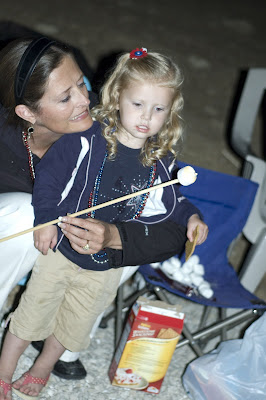 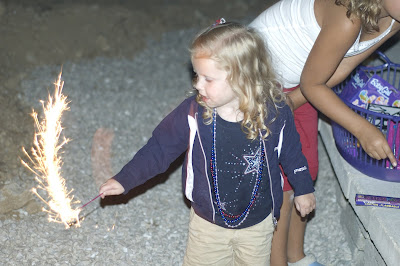 Hallie’s first attempt at sparklers. At first sparklers can be quite scary and she didn’t want anything to do with them. But then she got the hang of it as she nearly burned her locks of hair. We quickly grabbed the sparkler- which in turn freaked her out and she refused to touch another one! 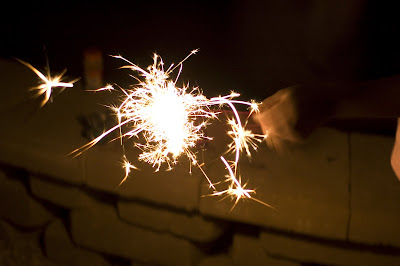 We couldn’t have asked for a better holiday. It was the perfect mix of sun/food/friends/family and a whole lot of fireworks. Towards the end of the night I found myself sitting alone looking off at the sun setting, relaxing in the perfect temperature thinking: I love this. I love being surrounded by people I enjoy and love, taking in this wonderful summer night. It felt so comfortable and real. Wisconsin is home to us at this point, and I love it. It takes those long winters to truly appreciate that warm summer night, and I’m going to take it as long as I can get it, and bask in those quiet simple moments.