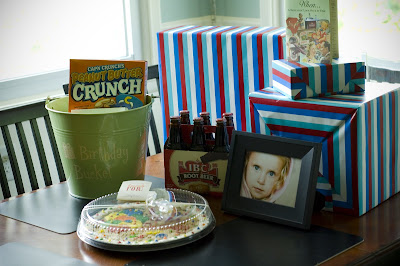 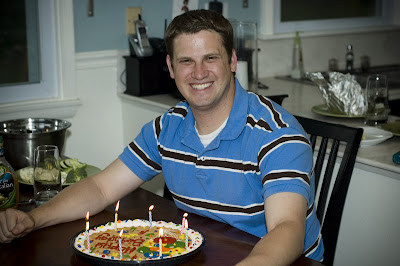 We had a birthday in our house today. Steve turned the big 27- his golden birthday, 27 on the 27th. I’ve been prepping Hallie all week to get her excited for daddy’s birthday and sure enough she didn’t let me down. Anytime we did anything for his birthday, shopping, wrapping presents, hiding presents, Hallie would report to Steve and tell him exactly what we’d done. She’s not a very good secret keeper yet, so consider yourself warned.

So the birthday mouse got me up at 6:30 this morning and she kept talking about daddy’s birthday (speaking loud enough she probably woke daddy up!) I’ve never been a big birthday person, but Steve is. So to speak his language I decided I would put forth the effort and make his birthday the way he wanted it, with all the fun presentation. We pulled the presents out of hiding, made our way into the kitchen and set up our Birthday Bucket (our new tradition, with the birthday banner which is not pictured).

We woke Steve up shortly after (who quickly commented how much he loved the presentation of it all, it made him feel special…mission accomplished)- we made breakfast and sat around talking about how cool Steve is before he had to run off to all his crazy Sunday meetings. After church we had Bob and Virginia over for dinner and birthday cookie, after which we had Steve open his presents. 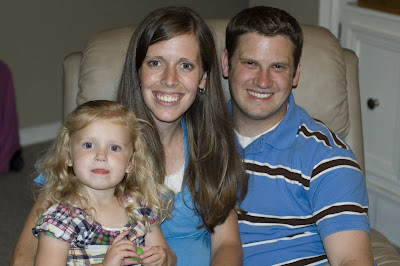 It was a relatively simple day, its hard when church/meetings consume the majority of the day, but at the end of the day Steve said it’s the best birthday he’s had in a long time…Clearly I’ve done an awful job with making him feel like the most important person on his birthday in previous years. But I’m happy to report, I’m on a steady incline. Next year will be even better. I’ve just got to start thinking of birthdays as holidays, which Steve has tried telling me his birthday is since the day we got married. But it is, it’s his holiday. We go all out decorating and doing fun things for Halloween, Valentine’s day, Christmas…every holiday. So from now on, birthdays are holidays, they will be decorated and celebrated as such. I think I’m going to enjoy this, I love an excuse to put up some fun decorations! 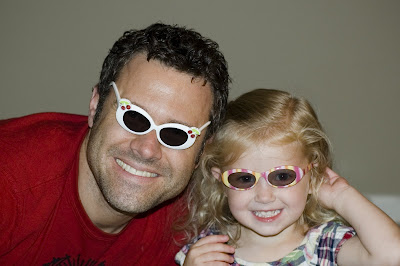 Bob and Hallie had a good time together this evening. After Bob repeatedly pulled a bouncy ball from Hallie’s ear (which she thought was fascinating), they moved on to dress up. Bob insisted on wearing the striped glasses, but we were convinced the colored stripes clashed with his red shirt. The white glasses, on the other hand, had darling glitter cherries in the corner. These not only complemented his red shirt, but they really did a number for his skin. Hallie, of course, can pull off stripes and plaid and make it look in style…definitely gifted.