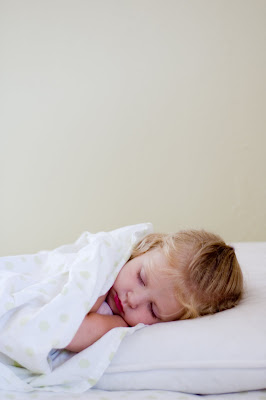 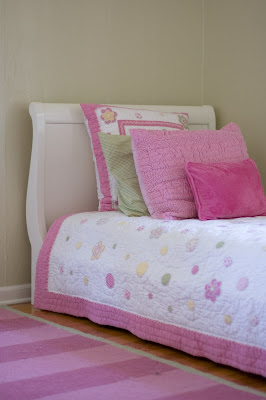 Hallie is officially a big girl, in a big girl bed! She’s been in a crib up until now, and most think that’s a little bizzarre. She’s going to be three in three months, and yet she never, and I mean never climbed out of her crib. It’s as if she climbed out one time and got in trouble or hurt so she never did it again, she just never climbed out. Wow were we lucky on that one. So there was absolutely no incentive to move her to a larger bed. Within the last couple months she’s started climbing into her bed for bedtime. Yet, she never picked up on the climbing out part. We figure we need the crib in three short months so we took the leap.

I was a little unsure at how she’d do at this, so we just put the mattress on the floor next to her crib for nap time last week. We emphasized what a big girl she was to be in such a big bed but that she couldn’t get out of the bed or else she’d have to go back to the crib. Only once did I have to ask her to get back in bed but she had a good excuse, “Baby was hungry, she needed lunch.” So she was getting into her play fridge to get some lunch. I couldn’t even argue it was so cute! So after a successful nap time with the new bed, I just ripped off the bandaid- I took the crib down right after she got up, there was no going back!

She loves her new bed (which was a long time and coming repainting and all, I’m glad to have that project complete!) and she thinks she’s so cool being a big girl- I see her in there sitting all the time reading books to her baby and monkey. She also likes to tuck them in when they’re “tired”. What’s great, is the fact that even though she can get out whenever she pleases, she still calls out in the morning for us to come and get her, and when she sees us at the door, she comes running over for hugs. I’m sure that won’t last much longer, but I kind of like it. She needs me!