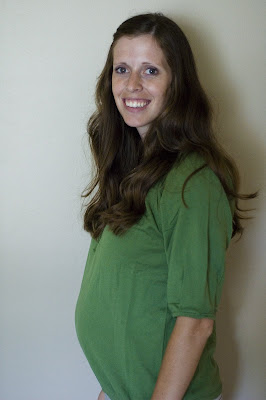 I realize this picture has been a long time in coming. Its just one of those things that never makes it to the to-do list. And if its not on my to-do list the chances of it getting done are slim to none. The few times I’ve thought to take a picture Steve’s not around, and it’s not worth the hassle of setting up the tripod- yada, yada. So yesterday as I was heading out to PBK I thought to ask Steve, so here it is in all it’s glory…which makes me wonder…Why do we take pictures when we’re pregnant? Of course not a whole lot of people like pictures of themselves pregnant and in a year we’ll look back and talk about how awful the picture was. I guess as humans we enjoy self-inflicted pain!!

I’m over 28 weeks at this point- and feeling it. “Baby Brother” (as Hallie has officially named him) is quite an active little guy, much more so than Hallie. For the most part, everything is going well. My main area for complaint is my back- Luckily Steve is the master massager which helps but clearly doesn’t solve the problem. I’ve been able to do most everything I was doing before which is a huge blessing. I have given most heavy lifting to Steve at this point. His philosophy is he’d rather be burdened with the task of moving the heavy object, than spend an hour massaging my back because I did it. What a great husband! Hallie still hasn’t quite grasped the concept that she can’t jump on me like she used to, or I can’t carry her for as long as I used to.

Life is good- I’m realizing at this point in the game my to-do list before the baby comes far exceeds the time capacity I have left. Which no doubt frustrates me. So slowly I’m taking things off my list and accepting the fact that it may have to wait until later. (Steve vetoed the idea of taking laundry and dishes off the list!) I’m doing my best to prioritize those projects left on the list. But inevitably we get invited to go to the splash park or to go out with friends, or Hallie wants a friend over, or ride her bike outside. As hard as it is to accept, Steve was right when he said I need to stop scheduling all my hours in the day. Because never fail things come up and then I’m bummed that I didn’t get something done. Which is why I need to start taking things off my list because if there on my list and not complete I get discouraged.

I’m nervous at the thought of a baby in the home again. Hallie is at a great stage- fairly independent, communicates what she wants quite well, and we’re free to be flexible with our schedules. A new baby doesn’t have any of that. And I’m well aware that my productivity level will greatly decrease for a while which concerns me. My need to be productive is far greater than I ever thought it was. I need to be productive. Being productive is fulfilling for me. It makes me happy and more relaxed, believe it or not. I’ve learned for myself that being productive doesn’t have to be anything big. As long as in my own thoughts I felt my time was spent well. Watching Hallie at the splash park is productive, teaching her out to write her “F” is productive, weeding my garden, replanting grass seed, blogging, working on the house, talking to my mom on the phone- that’s all productive in my book.

I know what we’re getting into, which is why I guess it’s a little concerning for me. We’re starting over at the unproductive stage- the tiredness, the feedings, the time commitment. This is going to be an adjustment. I’m trying to prep myself- but I don’t think I truly grasp the reality of it all. Its smooth sailing at this point, and I’m not sure what I need to do to prep my “boat and sails” for the storm we’re about to run into, physically, mentally and emotionally. Which I guess is why I’m trying to pack so much into this last 2.5 months to make sure things get done. Wish me luck!