So, a couple months ago I had the brilliant idea of flying my younger brother Cameron out to help finish our basement. It was just an idea at the time. For sure my brother would have better things to do than help us out, like work, etc…so it sat as an idea. I casually brought the idea to him to see if he would nibble on it…and he did. I was in shock. I then needed to get Steve on the bandwagon which was easier than I thought it was going to be.

So I started doing research, pricing things out, looking at plane tickets and before I knew it, both Cameron and his friend Rob were at our doorstep ready to frame and drywall the basement. I was in awe, I couldn’t believe I was really going to pull this off. We were in somewhat of a time crunch, we only had one week, 5 working days. The first two days were killer. They were working from morning until late night. At one point on Tuesday, we had both Cameron and Rob working, as well as the electrician, and the two plumbers, when the carpet guy shows up for measurements. We really packed it in there, but there’s no sense drawing it out any longer than we had to right?? We are on a baby time crunch as well!

Steve had the brilliant idea to take them to six flags on Wednesday to break up the working which gave them a much needed break. The next three days were shorter hours but still a lot of work, as well as some play; tennis matches, and the beach both Friday and Saturday. We would take a break during the afternoon until 8 at night (when Hallie went to bed) then we’d hit it hard again until midnight. My body is exhausted, as I’m sure everyone’s was.

As we were wrapping up Saturday night I marveled at our finished product. I can’t believe how much they got done, they pulled it off. We still have a couple things to wrap up, some mudding and sanding, but I couldn’t be happier with all that they accomplished. I’m so grateful for their willing hands, they were amazing. I’m officially giving Cameron “Brother of the Year award” and to Rob, “Friend of Brother of the Year award.” 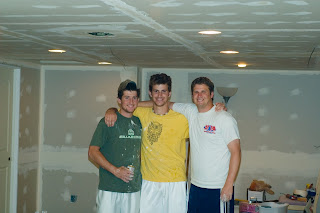 This evening after they had flown home we were resting our muscles when Steve says, “I’m going to miss them. They were a lot of fun to have around.” And I agree, they were great and entertaining, and Hallie adored them both. She was concerned when she woke up this morning and she ran to the living room to wake them up and they weren’t there. I told her we’d have to see them later. She replies, “Like at 5:30?” I wish, I’m afraid it will be much longer than that! We miss them already!