Hallie is still a little unsure about this whole “baby brother” situation.  She came to the hospital first thing Friday morning with Bob and Virginia and she immediately came running to me asking me if I was still sick. 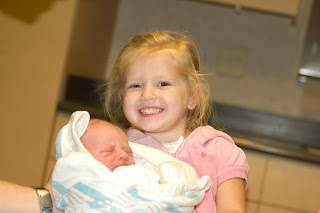 We asked her a couple times if she wanted to hold her baby brother, she resisted multiple times and then gave in, only to quickly say, “take him.” Virginia worked on  her a little bit more and she got a little closer. 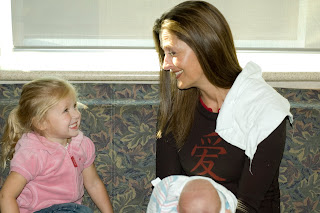 Hallie spent the rest of the day at friends houses and had the time of her life. She came and said good night to us at the hospital before moving to another friends house for the night. As she was walking out she informed us that we couldn’t come with her, we would have to stay.  She wanted to be with her friends.   We’re lucky she’s so independent and didn’t seem to miss us too much! The next morning she came to the hospital with her best friend Paige.  Once again, she didn’t want a whole lot to do with her brother, she wanted to play with her friend. Paige on the other hand asked to hold the baby and couldn’t get enough of looking at him. Upon Paige holding him, Hallie suddenly wanted a turn, which we gladly gave her. 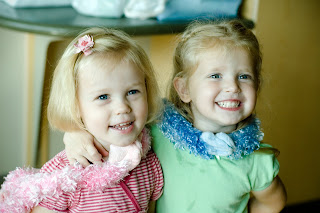 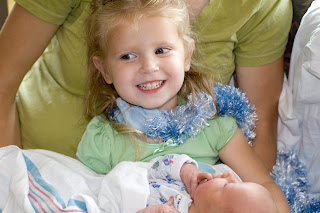 Hallie spent another afternoon with Bob and Virginia before coming back for her last visit for the night. She informed me 10 minutes into the visit she would rather be at Bob and Virginia’s house, clearly they’re the favorite aunt and uncle – nothing personal against any other relatives, but it’s hard to beat Grandma Gin and Poppy! At this point I’m starting to take it personal. The same girl who 2 days prior to having the baby asked me multiple times if we could be best friends.  Had I already been replaced? So quickly? Now she wanted nothing to do with me. This killed me. She was just acting up, throwing fits, screaming for attention. We played multiple games of red light/green light out in the hallway, went for walks just the two of us, but it just wasn’t enough. Steve stayed with her at home Saturday night and brought her back this morning.  And again…more tantrums like this: 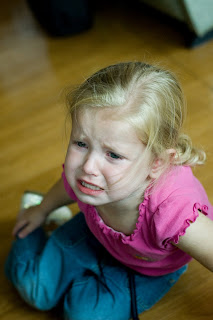 We were discharged this morning and it wasn’t soon enough for me. It’s so nice to be home again, hospitals just aren’t that comfortable. We’re still working with Hallie: games of Candy Land, dance parties, and whatever else keeps her satisfied. This is going to be more of an adjustment for her than I thought it would be. It seems as though all the sudden, all of her toys and all of her books just aren’t interesting anymore. Instead she wants to  play with everything she shouldn’t be playing with; the camera, computers, the baby stuff…you name it.  I think it’ll hit her in the next day or two, that “baby brother” isn’t going back to the hospital, he’s here to stay. It’s a good thing Steve has paternity leave to help diffuse her energy!