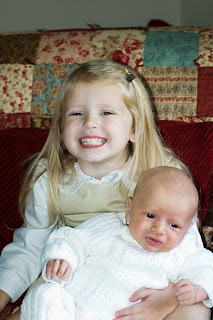 Is Hunter really a month old already…really? If counting by television standards, he would be four episodes of Survivor old. That’s four tribal councils, four reward challenges…the list could go on and on. Or we could count by sleepless nights, but what would be the fun in remembering those. Hunter gets more than enough attention and love- Hallie thinks he’s her little doll and she’s always wanting to change his clothes, put on different shoes, and of course change diapers. She can be a little too much help at times, the poor kid gets smothered.

I think back to how careful we were with Hallie, so protective. Yet the second comes around and it’s okay if Hallie manhandles the binky- we still use it. Or the blanket that has spitup on it, he’s just going to dirty it again, why wash it!! Before too long, we’re just going to let Hallie babysit him…she’s really good with her dolls, we figure she can handle it.

Although exhausting, it’s been a great month! 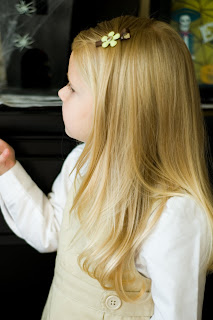 We straightened Hallie’s hair for church the other day and it made her look so much older. Steve’s not sure he likes the older look. We’ll stick with her curls for now! 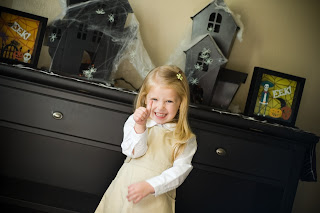