I had the opportunity to go to the Oprah show with some friends. Thank you Linda for scoring last minute reservations. I attended a special two filming session about a year and a half ago, the only downfall was the topic…menopause. Not something I was totally interested in. So I was so excited to be able to go again and pray that it wasn’t on the topic of Menopause again!!

It was an early taping which meant we had to be to the studio by 7:00. Making the two drive from Milwaukee that morning was not going to be pretty. So, Linda arranged for a Hotel the night before. We each put our kids to sleep and left town. That was the first time I’ve ever stayed the night from Hunter which was harder than I thought it was going be. That being said, I slept like a baby and it was wonderful!

{Sidenote} We pulled up to our hotel and it looked so familiar, yet I couldn’t put my finger on it.
Once we were checking in I realized that I had stayed in that hotel years ago when I was serving as a national officer for Business Professionals of America. I instantly flashed back. I could remember where certain meetings were held, the exact elevator that took us to our “club room”. I remembered every detail about the trip. The rain, the constant rain. The other national officers. Having my parents there as we conducted the national convention. Milkshakes from Hard Rock, yes multiple milkshakes. The sweet suite we were hooked up with. And the absolutely hideous uniforms they made us wear. We even had to travel in those blasted uniforms which never failing pegged us as flight attendants. Which of course led to many people asking us for directions. I’m sure we confused a lot of people as we got a kick out of giving random directions in airports we had never stepped foot in! 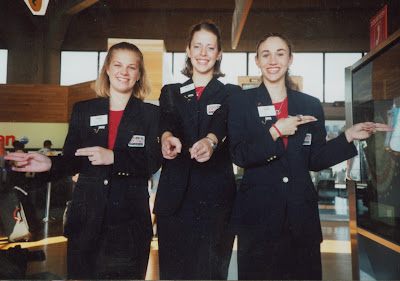 Back to Oprah:
We showed up to the studio in plenty of time and we waited for what seemed like forever. We were then seated in the studio with some fabulous seats. Our party was split up, as there was an aisle that separated us, but I will take that any day if I can sit on the second row, and Linda was even on the front row. I’m positive she made it on television, she had to of. After getting situated they informed us the topic: The Octuplets grandfather speaking out for the first time, with Dr. Oz to weigh in on the issue as well.

I don’t traditionally share my opinions on such topics – but seeing as though it makes my Oprah experience what it is, I thought I’d share…if you disagree, that’s your right.

I was already intrigued. I have a strong opinion on the topic so already I knew it was going to be better than the menopause show. Oprah comes out in all her glory, barefoot. Makes herself comfortable. Reads the first couple lines of the prompter. And immediately starts the show. If any of you think the mother of the octuplets is a little crazy, the apple didn’t fall far from the tree. Her father was a little out there as well. Thick accent, hard to understand. I found myself straining just to make out what he was saying.

His thick accent and scattered thoughts made it difficult to understand the message he was trying to get across. I’m still confused as to if he thinks his daughter is crazy and needs to be mentally checked out, or supports her decision because she’s a bright girl. Bright…not the word I would use to describe a single mother of fourteen who chose to do this because it had always been her “dream” to be a mother. (Exact quote from a clip we were shown.) That dream is fulfilled with two kids, which in and of itself as a single, non-working mother would be difficult. Fourteen seems obsessive. Clearly you know where I stand on the issue. It was indeed an interesting show and Dr. Oz brought up many points I completely agreed with.

Many in the audience wanted to place blame on the doctor, not the mother. Although valid, it becomes too easy to push blame places. When do we come to the point where we accept our decisions and the consequences that come with them? The father wants everyone to stop punishing his daughter and was so upset that the doctor would do this procedure, but there’s two sides to the coin, his daughter requested it.

Although my opinions on the situation didn’t change from listening to her father, Oprah, or Dr. Oz, I left with a deeper concern for those poor children. As bad of a decision as it was for the mother to make, she now has 14 children who will suffer the consequences of that decision. My heart goes out to them and I pray the mother has the decency and common sense to start focusing on those children and do what’s best for them. Even if that means giving those children a better life through adoption. Only time will tell…

One of my favorite things about this taping was the intensity of the audience. Before Oprah even entered the studio, the topic had been presented and the opinions of the audience were already being shared with the production crew. People would raise their hand, the mic would move to them and they’d share their thoughts. It was great, it was tense. There were tears. There were rolling of eyes. There was some serious attitude. I love a good discussion where both sides are represented and both sides are willing to share their opinions honestly.

It was a great time- I would love to attend her show once a year. Which is funny, because I can’t remember a single time in the last two years where I’ve even watched Oprah. I even forgot to watch it last time I was on. I won’t forget this time. The TiVo is set. Tuesday. Watch it! 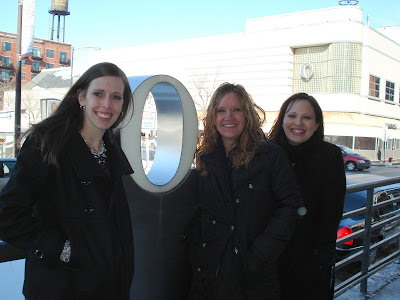 Don’t mind the picture…it’s only 12 degrees and with wind chill below zero. Yes, my face is wind burnt. My toes are still numb. The things we do for Oprah…