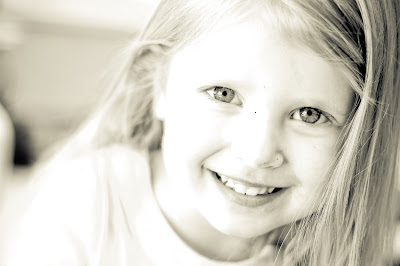 The doorbell rang during her “rest” time. She comes running out and greets the guest. Minutes later the door is shut and this was our conversation:
Hallie: Can I be done with rest time?
Kara: (Looking at the clock) Sure, you can play downstairs if you want.
Hallie: Thanks Mom. That was so nice of you to say that. Thank you so much! (giving me a hug)

We were getting her ready for bed, and she was having meltdown after meltdown. Kicking, screaming the whole works. We were trying to get her to get her pull-up on and she was not having it. I went ahead and grabbed one for her which made her fly off the handle. I retracted and allowed her to grab her own pull-up. Screaming and crying she thumbs through all of her pull-ups, pulling out one from the very end. And with tear stained cheeks she looks at me and says, “This is what I was thinking about it.” (No that’s not a mistype, she says that exact phrase multiple times a day)

She asks to hear a Nephi story all the time and she calls you out if you try and skip certain parts. Right now she loves the David and Goliath story as well, she goes as far to act out how David hits Goliath with a rock and Goliath falling. It’s classic. As soon as we complete the story she says: “Let’s talk. Let’s talk about a Nephi story.”

We are practicing the law of natural consequences with her. I was arranging jalapenos on a tray and she insisted I give her one. This was the converstaion:
Kara: No, they’re really hot. They’re not pickles
Hallie: But I want one.
Kara: No
Hallie: (crying) but I want one
Kara: Fine take one
I’m watching her face very carefully, waiting with an open hand when she decides to spit it out.
Kara: It’s pretty hot huh?!
Hallie: No, it’s not hot, it’s just warm. Can I have another?
Kara: Why not.
She proceeds to eat five more. I’m convinced they were hotter than she was letting me believe, she was just trying to make a point. I tried them right after that, they were hot.

I was lying on the floor stretching my back by rolling my legs from one side to the other. I then started to do a rocking motion of my body from left to right to continue to stretch. Hallie walks in.
Hallie: Stop it, Mom
Kara: I’m just stretching
Hallie: Daddy says you need to stop it, we’re not supposed to shake our bum like that.

I often call our little H-man Mr. Turkey Lurkey. One afternoon I was playing with him and I accidentally called him Mr. Chicken instead of Turkey Lurkey. Hallie quickly joined in. “Hey Pig”. Turkey Lurkey, Chicken, Pig…I can see how she would get confused.

We were driving in the car and she kept asking for the “fight” song- I was clueless as to what she was asking for. She repeated, “The fight song, the fight song”. I still had no clue, and she could tell and she started getting frustrated, the tears began to flow. I’m still clueless, we kept driving. And then a song came on the radio by Pink, and Hallie starts clapping, “I love the fight song.” I was so confused. Sure enough half way through the song I hear, “I’m going to start a fight”. Great! The song is quickly over and Hallie asks for it again. Of course it was on the radio, and we can’t play it again. She again became sulky. I quickly turn to another station and I got her all excited for the next song. “We didn’t start the fire” comes on and she quickly says, I don’t like this song, I want the “fight” song. However, I make the song so fun she can’t help but sing along. we get home later that night and she asks Steve for the “fire” song. Steve gives me the look and I tell him, “We didn’t start the fire”. He’s still looking at me funny. It’s better than Pink, isn’t it. Maybe…