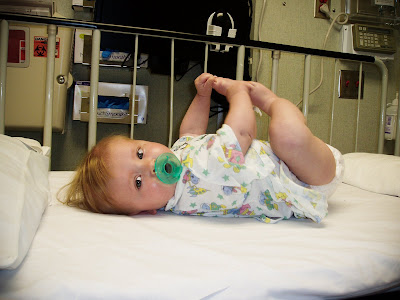 Three years ago yesterday, we took our young child through the doors of St. Luke Hospital in Boise at 6:30 am. Hallie had been diagnosed just 7 weeks prior with Hirschsprung’s disease (disease of the colon) and she was having a portion of it removed. We were new young parents, unsure as to what to expect, exhausted and tired of listening to our daughter’s non-stop wails and a tad bit nervous. Although it was just three years ago, it seems like a lifetime ago. Hallie seems so big now, we have another child, and life keeps marching on. Here are a few things I remember about that experience:

Hallie refused to take a bottle. The surgeon informed us she would have to be on clear liquid 12 hours before surgery. When I informed him she wouldn’t take a bottle, he kindly told me, when she gets hungry enough she will. And that she did. After holding out for 9 hours, she finally took the bottle.

Staying in the Ronald McDonald House. What a cool service/facility. We had just moved all of our stuff to Milwaukee just a week prior after Steve graduated to search for homes, and life was a little chaotic. It felt good to be able to stay so close to the hospital and have a little room we could call home for four days. It was hard to see so many families there for much longer terms as their children required so much medical attention, we felt blessed to stay for such a short time. 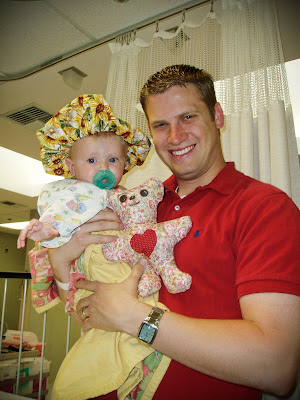 We had to wait in the surgery prep area for what seemed like forever. They told us we had to be there early, so we were. But we waited and waited for the surgeon to show. Hallie was starving at this point, screaming and yelping. And although it was a relief to finally see the surgeon, it was so hard to watch them hold her down, arms and legs kicking, as they wheeled her away. That hurt. Feeling so helpless and so afraid.

Having my parents there. My dad took the day off work and my mom came as well to sit and wait with us, that was a huge relief. Just knowing that someone with a little more life experience than myself was sitting next to me made me feel at peace, having it be my parents was just a huge bonus.

We played Settlers of Catan in the waiting room, as we’d watch her name on the screen to get updates. 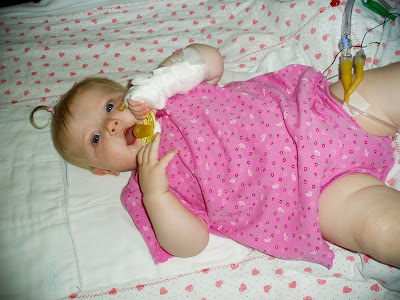 After five hours the surgeon came in to let us know the surgery went well. He started explaining the process, explained that as part of the they removed her appendix. I was a little confused and he could tell. He thought he had told us that he was removing it, but he didn’t. Don’t get me wrong, I’m pleased as punch it’s gone, I was just surprised. 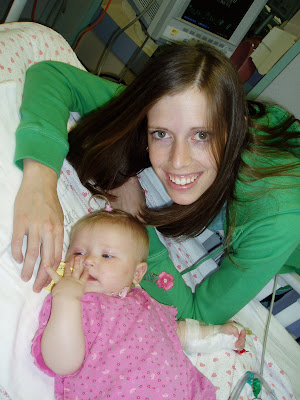 Sitting by her bedside. This was hard for me. It was hard to even recognize her, and it scared me just a bit. She was so swollen…I mean really swollen. She was hooked up to all sorts of machines and I swore that it couldn’t be my child. So we sat, with my parents the first day in a small room, with Hallie in a small bed and watched as she slowly started to come to life. There was no place to sleep in her room, so at 9 that night we stepped out the doors and put all our trust in the nurses watching over her and said yet another prayer that they would love her the way we did.

Days went by and she continued to progress. By the last day she was sitting up a lot better, smiling a lot more and much happier. And although I was so excited to have her released from the hospital, there came with it an anxiety. Just as it was before the surgery, our life was in a somewhat transient/chaotic state. Steve would return to Milwaukee shortly after to start his job. I would stay with my parents for a couple more weeks to be close to the doctor for the follow-up appointments. All of our stuff was stored in a pod unit back in Milwaukee. There just didn’t seem to be any normalcy and this started to concern me.

And although the concerns were valid at the time, my young and naive state didn’t take into consideration how resilient children are. She will never remember that experience in the hospital, ever. It effected Steve and I much more than it will every effect her. And I think it matured both of us quickly. Sitting days in a hospital with your child attached to all sorts of machines that beep will do that to you. We’re better off because of it.

Which brings me to the last and final thing I learned: Trust a mother’s intuition. I (and also Steve) knew early on that something was wrong with Hallie- it just took some time to find a doctor who would listen. 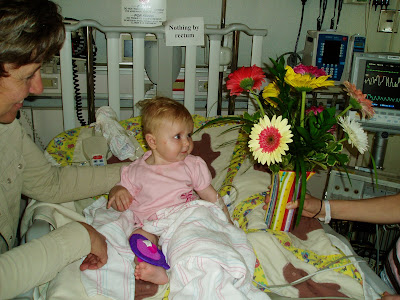