When Steve and I were on our honeymoon I bought a really fun tropical looking plant. It was small and dainty but it was ours, and I was so excited to bring it back to our new home together. Unfortunately, through the process of moving stuff from Arizona to Rexburg our poor plant became frosted. It wilted and by the time we arrived in Rexburg, Steve was so sick of this ugly plant he put it outside our front door to take to the trash.

I was crushed. So days later I went and bought a similar plant at a local nursery and brought it home. Sure it looked the same, but I knew it wasn’t the original. So, I ended bringing the dead plant back inside and began nursing it back to health and planted my new plant as well. Flash forward 5.5 years. Our original plant made a full recovery. We then moved it out to Milwaukee and it survived. It grew and grew (it was our “love fern”) and I was proud that it pulled out of a near death experience all those years ago.

About three months ago I noticed our original plant looking quick ill. I admit I didn’t devote the time to nursing it back to health like I did originally. I think it just didn’t like the Milwaukee winter, who does! There wasn’t enough sun to sustain it’s fragile life. About three weeks ago, I noticed the plant was dead. Full on dead. The plant that once stood 4 feet tall had become limp and completely collapsed on itself. I was crushed. I should’ve paid more attention. I should have moved it to a better location, more water, something. But I didn’t, it died. I was happy that I still had my runner-up plant in pristine condition. It was sitting at about 2.5/3 feet and healthy as a horse. So you can imagine my confusion when I wake up one morning and find this: 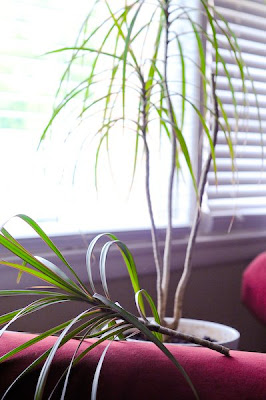 I thought for sure there must be some bug out to get my plants and I was once again crushed. Now both my plants are going to die, this was not a good situation. After further examination, I noticed that this plant didn’t wilt like the other one. The leaves were still a beautiful green. I picked up the branch and noticed a broken stem. Broken. Odd, who would possibly break my plant?? And then I see my first item of evidence: Hallie’s pink blanket. Upon questioning my child, she adamantly denied doing any wrong. Second piece of evidence: I saw Hallie touching my plant and she wasn’t being gentle. Third piece of evidence: She confessed, I tricked her into talking about the plant and then talked her into feeling sorry for the broken plant and in a moment of weakness she cracked. I knew she would…

So now I look at my little plant with one of it’s three branches completely broken off. Do I go buy another one? Or consider myself lucky that I’ve kept it alive this long with two small children and toss it out, and forget about the whole “real plant” idea?