No, his name was BoBo. And Hallie loved him. The horse was probably only three feet tall, so it should be no surprise that Hallie looked so big riding it. But she did, she looked grown up.

Hunter liked the horse from afar, but once he actually got on it, he wasn’t so sure, and he went into bobble head mode. With every step of the horse his head would carelessly flop around. Quite funny.

He was more fond of the see saw.

There were bubbles. Until they were all dumped out. Isn’t that always the case with bubbles.

Hunter was in heaven with my mom’s bucket of cars. He ran them up and down the couch, the chair, the stairs and even the piano. He loves cars.

We were able to go to a lake where we went for a canoe ride. A short canoe ride. I do have a young children who didn’t last very long. They were more interested in being in the water than rowing through water. And that was okay.

(Just a little Dew dude!)
We witnesse some beautiful sunsets, and some great storms. 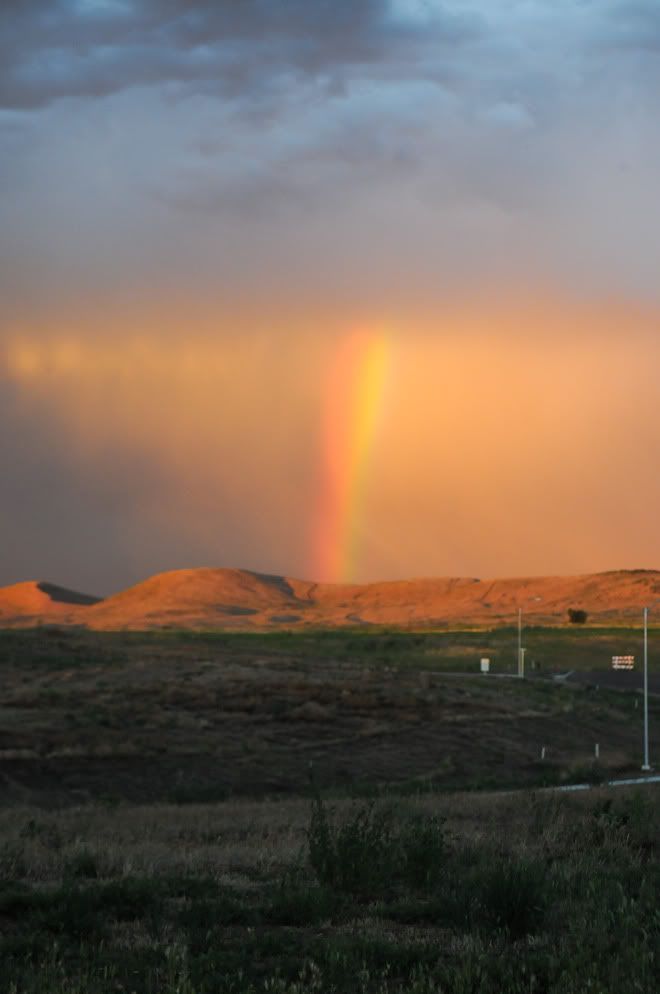 I was able to spend some time with a few dear friends who I miss greatly. We’ve been friends since grade school and I adore them both.

And one of them has the cutest little bundle of joy.

We introduced Hunter to some sprinkler fun and I’m not sure he liked it. He cried every time the water hit him. He’s probably traumatized from Hallie holding him in the water!!

I was able to watch almost every world cup game which was so enjoyable but probably not something I’d do if I was at home.

Hunter learned how to crawl out of the crib while we were there, which was not fun. He climbed out 5-6 times every time I put him in there. He missed out on a lot of sleep as he was playing Houdini!

My brother’s dog had puppies the last day that we were there and the kids thought that was so cool. Hunter would just stand and point at the dogs saying “doggie, doggie”. We’ve always told the kids they’re allergic to dogs. (most know my disdain for all animals) I’m hoping that buys us many years of a pet free house. Who am I kidding. I will never have a dog. Really. I know a lot of people say that and then give in years later. I really won’t. I don’t even like the zoo. Truly.

It was a fun trip. I love spending time with my parents and getting to know them better and allowing them to know our children. We love you!

Next up: Traveling to Rexburg with Daddy!

Leave a Reply to The Critchlow Family Cancel reply