After a week with my parents, Steve flew in and we drove over to Rexburg to meet up with his parents and two siblings.

What a treat it was to spend a weekend with such a small number of family members. Steve has such a large family that when we get together, it’s really hard to feel as though you have time with everyone individually.  With just two families to focus on, I felt that we really got to spend quality time and enjoyed some great conversations.

Sidenote: On our six hour drive I noticed that Hunter’s legs were getting a little too much sun. I searched the car as I kept one hand on the wheel trying to find a blanket or shirt or something we could hang in the window to block the sun. That’s when my genius idea hit…we got all sorts of fun looks when we drove past people. But the diapers served their purpose, they absorbed all the suns rays!!

Hunter had never met these cousins so it was so fun to see them all interact. Hallie was in heaven and all of her cousins were so sweet and kind to her and she loved every minute of playing with them.

We went and roasted some dogs and mallows, fed some ducks and played a little soccer.

We also hit the Whoopee Days (yes, that is really what it is called) Rodeo. This was only the second rodeo I’ve attended and it was a great time. The kids were enthralled but from a few of Hallie’s comments I could tell she was a little concerned. “Is that hurting it?” “Why are they wrapping rope around his legs?” “Why is it trying to hurt him?” I realized, a rodeo is a hard concept to explain to a four year old. But when the questions get hard, just give them a snow cone. They usually lose interest in the animal being chased around the arena!

My sister attends school in Rexburg and was able to join us for our outing!
Hunter loves his cousins. Especially when they are wearing hats. Hunter could not get enough of this hat. He would take the hat, laugh, put it on his own head, laugh, throw the hat, laugh. I’m sure glad that hat went everywhere we did because it provided endless amounts of entertainment! 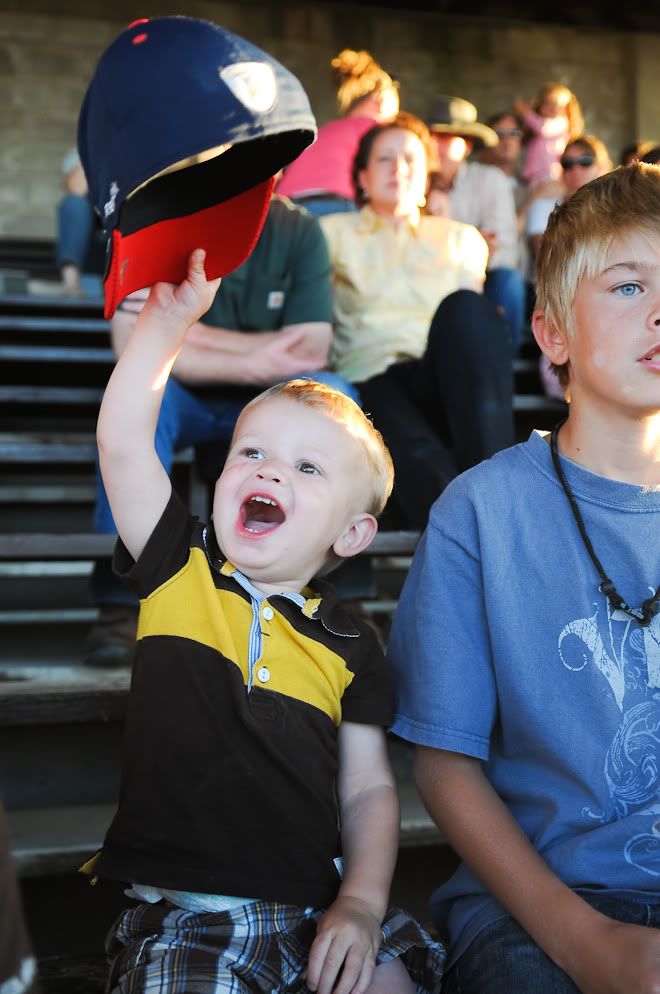 Our nephew entered the arena for the pig chase and ended up getting some money! It was the funniest thing to watch.

I think my favorite event was the bull riding. I would cringe every time I saw that bull getting ready as they opened the gate but then I couldn’t take my eyes off the rider as I saw his body contort to all sorts of shapes I didn’t think was physically possible. Then as they fell off I always held my breath in fear that he would get stepped on or trampled. Neither of the two happened. Thank heavens. I don’t know how I would’ve explained that to Hallie. Even two snow cones probably wouldn’t have stopped the questioning!

Also in Rexburg we hit up a fabulous pool at a friend of Steve’s parents. It. Was. Heaven. And Beautiful. I could’ve stayed there all day. Hunter was exhausted and nearly fell asleep in the water. Hallie was a little fish and couldn’t get enough. She clearly takes after her father.

We really enjoyed our time in Rexburg. We were able to see our old apartments, our old condo, go to the temple (which is so nice to be just a block…a block away!), toured the campus (which is so different just years after we left), see friends, see old teachers/professors, enjoy the beautiful weather and we loved our time with family.

Here is our traditional picture of the kids with their grandparents. It didn’t go over too well with Hunter. We said we would take another later when he was in a better mood. But I kept this picture “just in case” we didn’t get one later. It’s a good thing I kept it. It’s the only one we got. So this will forever mark our 2010 trip!

Next up: Fourth of July in Rexburg