Our little girl is five…and she has been for a month and a half!!

We didn’t have a party this year because it’s our off year (we’re doing parties on the even years), and Steve was going to be out of town, so we just had a small party the day before Steve left and then for her actual birthday we met up with some friends at McDonalds for lunch.

Of course, with a birthday near Halloween, it’s fairly predictable as to what Hallie is going to pick for a cake. No princesses here, just a witch cake.

Here favorite present was a Nintendo DS game; Mario Kart – she’s in love. Thank heavens her older cousin had an old-school DS to hand down to her. It’s perfect. 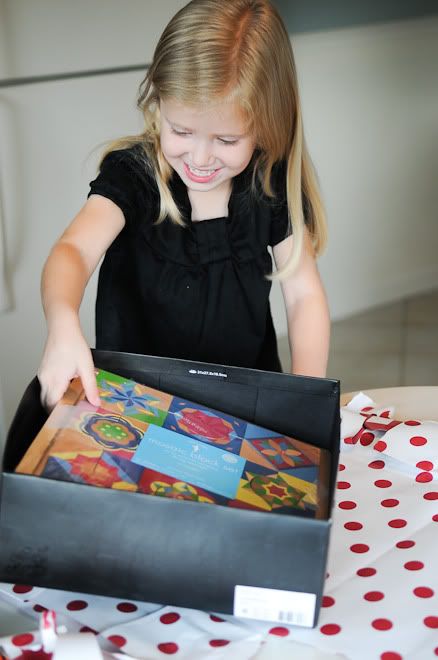 It seems as though this year we’ve seen a lot of growth from this little girl.

She started school this year which was great for her. She needed school. It was important for her to have something like school to belong to.

She loves to sing, and she loves to watch herself in the mirror while doing it.

She is very nurturing and it shows in how she takes care of her babies and her little brother.

She impressed her teacher with how she could count to 100. First by ones, then by fives and again by tens. The teacher stopped her when she started to go pass 100.

Her new found love on the playground are the monkey bars. As dangerous as they are, she can’t get enough of them. And when she gets tired, she’ll pause and then drop. I swear she’ll break a leg one of these times.

Loves a craft project. I often find her pulling out paper, crayons, tape and scissors. A lot of times I’ll end up with a special note in an envelope on my desk. Multiple envelopes a day.

She’s realized she can do her own hair. She brushes it out, puts it in a low pony tail and puts a flower clip in. I love that she does this on her own!

Loves to be in the kitchen and wants to be helping. I’ve found that setting the table is a great job for her.

She learned how to ride her bike without training wheels which was a right of passage for her.

Still takes a nap half the time and it kills me that this will come to an end very soon. Hunter will likely give up naps first.

Reads consistently at this point and manages to remove every book from the shelf and puts it on her bed.

Loves her friends. Loves a playdate.

Dresses up all the time and always includes Hunter in her fun.

She’s a very sensitive and at times emotional little girl with a heart that doesn’t stop giving. She’s full of love and concern for other people. The older she gets the more I just want to hold her just a little bit longer. And she lets me a lot of the time. I tell her often I wish I had three Hallies. One that would go to school, one that would snuggle me and one that would play games with me. To which she replies, “Can I be the one that goes to school?” She’s my little buddy and I’m grateful the Lord entrusted me with her, she’s just what I needed.