The fence in the front of our house has been haunting me.

With its rotted wood and rusty nail residue running down the chipped white paint – it was begging me to put it out of its misery. So several weeks ago I sought out to conquer.

I brought out the screw driver and started working on removing the screws.

But they were covered in paint- so I had to switch gears and start removing years of paint on the screw heads. I started with a wire brush. That failed. I brought out the exacto knife. That failed. I brought out the chisel. Surprisingly enough, it worked. Tedious, but it worked. After an hour and a half of figuring things out, I had the paint removed from two screws…there were 64 total. I was deflated and discouraged. I left the project. I acted as though it didn’t exist for two weeks.

One day I was out on the front porch and noticed that I had left the screwdriver out there weeks prior. It gave me a renewed sense of hope. I pulled all the tools back out just two hours before I needed dinner on the table. (My priorities aren’t always where they should be!) I went through all the tools once again and sure enough they all failed to work again, which should’ve come as no surprise. I did searches on-line and tried all their silly tricks to get stripped screws out. Every single one of them failed. I had no other choice. I had to pull out the dremel tool (my birthday present from two years ago). 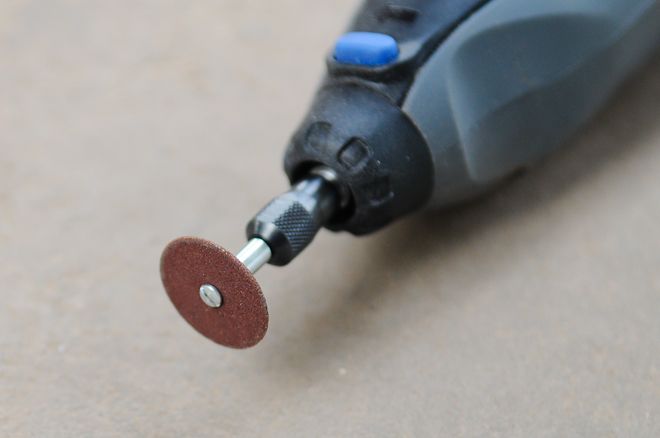 With a cutting disc in place I cut a single line into every screw.

With this new deep cut in every screw I was then able to use a screw gun to remove all 64 screws without messing with built up paint. I removed two of the 5 panels in one afternoon and with darkness closing in, I was forced to pack up the tools for the night. We ate cereal that night.

The next afternoon the last three panels came crashing down. We eggs and smoothies for dinner that night!

With the fence down, it’s more apparent that all the bushes need some serious trimming. Pictures to come soon.